It was just a cheeky Sunderland-related question slotted into a quick interview with a Barca fan ahead of tomorrow’s 2011 Champions’ League Final. Who among the current SAFC squad would you like to see in the blue and red of Barcelona? The answer came back quick as a Messi shot. Start learning Catalan, Asamoah. Among all the world’s culers – to adopt the mildly rude nickname for Barca fans – we found ours in London, and he’s Welsh. And Neil Watson* is a man in need of a ticket; as a son of Swansea, he has one for the playoff final against Reading on Monday. If you see an optimist wandering around London wearing a banner pleading for help to get him to Wembley tomorrow night too, you may have encountered Salut! Sunderland’s first Champions’ League “Who are You?” candidate …

Later today: Scott the Red from Republik of Mancunia …

The world of football, some United fans included, expects a Barcelona victory. Is such certainty simply a reflection of reality, or dangerous talk for Barca?

it’s always dangerous to assume you have won a game before it is played. Barcelona expect to win every time they take the field, and by that I mean the fans, the coaches are the players. United however are the 2nd best team in Europe and we expect a big challenge from them, our biggest this season and from a United point of view a stronger challenge than 09. With the game being played in Wembley where we have both won European trophies before, it just adds to the magnitude of the occasion

As a Barca fan, how do you rate the Champions’ League final by comparison with La Liga?

What drew me to Barcelona was Ronaldinho. He played the game like no one I’d seen before, not only with skill and power but with joy. Since his time at the Nou Camp I have seen the rise of the current team including a very special Argentinian teenager by the name of Lionel Messi.

And how well do you know Spain, Catalonia, Barcelona as a city, the language(s), the culture?

I’ve been fortunate enough to visit the Nou Camp and Catalonia on a number of occasions over the last five years and their passion for the game is unrivalled any where else in the world … as the motto says it’s more than a club.

Are you strictly a one-club man or do you follow an English or other team too?

This is what makes this weekend so important for me. I was born and raised in Swansea. On Monday they will be playing in the Championship play off final. That game I will be attending and it would be magnificent to be able to see both games for said reasons. As a Welshman I have always idolised Ryan Giggs … so I have taken interest in ManUtd to an extent. So to have your top three teams playing in the same stadium, and in the same city as I now live, for such huge prizes … it’s going to be a very special time for me.

Who apart from Messi do you consider absolutely vital to the Barcelona team and what is the nearest you have to a weak link?

I believe no one in world football has stopped Xavi and Iniesta. They are footballing soulmates and make the game look effortless at times. They make Barcelona tick. The team that can break up Xavi and iniesta by keeping them from being on the ball will beat Barcelona … but for me there’s isn’t a midfield in world football to compete with these two. They are complimented beautifully by Sergio, who is often highlighted for all the wrong reasons but has the composure and work off the ball to complete the best midfield there has been in decades … not to mention he’s played centre back for the last two rounds.

And is there anyone in the United line-up that you fear?

Giggs and Rooney have a great understanding. Between them they have changed many games this season. Carrick has been excellent this season and so has Hernandez. Barcelona aren’t underestimating UTD one bit. But players like Messi, Villa, Xavi etc have the ability to change the game with moment of genius.

Do you consider La Liga to be light years ahead of the Premier, just a little better or not quite as good?

I think the players within the Spanish league are more technical and care more about their style of play. If bottom of the PL played bottom of La Liga, the game could go either way but I know who would play the more attractive football … the Spanish team. However I believe that if ManUtd played a season in Spain, they wouldnt win the league (top 3/4) whereas if Barcelona played in the PL I’m pretty confident they’d win the league or 2nd at worst

As a Welshman, do you feel the rivalry with Real madrid as keenly as a Catalonian might?

The last year or so has seen the rivalry increase. It has become more bitter as there has been such a contrast in styles. Mourinho hasn’t tried to beat Barcelona which I think they could, but hoped almost that Barcelona would beat themselves by overplaying and not being clinical enough. Barcelona now also feel superior due to Madrid negative play.

Cheating reared its head in a big way during the semis. Do the English get too uptight about what is simply part of the modern game or do you accept that play-acting – diving, feigning injury, trying to get opponents booked or sent off etc – ruined what should have been a terrific spectacle and needs to be stamped out?

It’s the theatrics that make the difference. Just like every Spanish star, I have seen most of the PL elite throw themselves to the ground in an attempt to win a decision. Just without the complimentary three roles and face grab, when in fact the player got tapped on the leg …

Not to mention, the Europeans are far more theatrical in general, a lot of hand gestures etc. Whereas the average English pride themselves on being as tough as possible … the difference in culture doesn’t help.

Games are won and lost on such small margins that players feel the need to create any sort of advantage whether that be a dead ball situation or playing a game out against 10 men. That’s the same for both countries. The manner in which they plead for such margins is what drives most onlookers mad.

A couple of cheeky Sunderland questions:
1) without being greedy, who would you take from our side?

Gyan…fantastic player. Great signing. I just hope you can keep hold of him and make some other good signings this year, hopefully giving you that final push to get into Europe

2) what do you know or think of our club?

Great club who have always had good honest players. Not sure how well you guys travel but you certainly aren’t an easy away trip for any PL side. Steve Bruce is a top manager and I wish you well for next season.

Tell us how hard you’ve tried for a Wembley ticket, say where any kindly soul with a spare should contact you and give us an idea of how you will follow the match if you’re unlucky

With Barcelona, ManUtd and Swansea all being at Wembley this weekend, very hard. I already have my Swansea ticket it would probably mark the most incredible weekend in my life if I were to be able to pick up a ticket for this game also. Genuine fan seeks ticket and would remember this occasion forever. I will be walking around London with a sign TICKET WANTED. This is the message I posted at barcelonafans.org: “I live in London and have been to the Nou Camp to see home games. If anyone has a spare ticket, call +44 (0)7890 551491. I have a ticket for the Swansea game and would love to have a ticket for the Barcelona game. Please don’t sell any tickets to touts; think of the real fans. 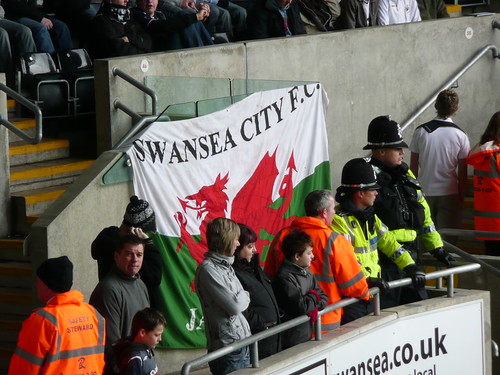 * Neil Watson on Neil Watson: I am 25. Born in Swansea, qualified as a personal trainer but moved to London one year ago and work in Harrods as a sales supervisor.