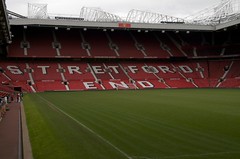 Lots of raw nerves were touched with reaction to our Republik of Mancunia interview yesterday, with Manchester United fans displaying a mixture of indignation and bewilderment at both sites, and loads of thumbs-down here, leaving Salut! Sunderland to ooze all the wisdom and fair play it could muster. Now the boot is on the other foot: the Stretford End Arising blog – click here to see it – lobbed some questions our way. Here goes …

Stretford End Arising: In recent years games between Sunderland and Manchester United have been tight affairs with only a single goal separating the two teams. What are your views on Saturday’s fixture? How are Sunderland likely to line up?

Salut! Sunderland: We did better at your place than ours last season. At Old Trafford, although you finished strongly, it took Richardson’s folly and a wicked deflection to save a point for you. At Sunderland, we huffed and puffed but United always looked safe on 1-0 and capable of stepping up a gear. Saturday is our third major test in a row; you’ll be on a high after Valencia and it is going to be tough. I suspect Bruce will stick with Mignolet in goal despite Gordon being fit again; defence depends on the injury list but our chances of getting a result would rise if Mensah were available Up front, I wonder whether the ineligibility of Welbeck will tempt Bruce to start with both Bent and Gyan, but suspect he’ll flood the midfield. Our key players could be Mensah if fit, Jordan Henderson (a Man Utd fan, I was distressed to learn recently) and Steed Malbranque in midfield and, of course, Bent. And Cattermole’s ability to stay on the pitch.

How have Sunderland started the season?

Reasonably well but lacking a cutting edge. If we’d played against Birmingham, Wigan and Stoke as we did against Man City, Arsenal and Liverpool, we’d be in the top six.

Personally, I think Danny Welbeck looks a classy player. How has he faring for Sunderland?

I like the look of him. He’s shown good touches and it will be interesting to see how he develops as he gets more games. But his best performance so far was not for us but the England Under 21s.

See also our two Who Are You? features for the Sunderland v Man Utd match:

The Republik of Mancunia speaks

The Gods – and divers – of Old Trafford

What are your thoughts on Steve Bruce as a manager?

I was not wildly enthusiastic when he arrived, less because of the tribal aspect than because I was naively hoping for a big international name. In truth, he was probably the right man for the job. He’s done a steady job despite last season’s abysmal, winless run but the real test starts now that he has his own squad assembled and an awful lot of money spent.

Which of the summer signings have impressed and/or disappointed?

Gyan has struggled to regain full match fitness but took his goal at Wigan with great aplomb, not something we’ve seen much of since Kevin Phillips and Niall Quinn’s terrific partnership. Riveros looks a neat, intelligent midfielder; Mensah’s return was hugely welcome and Simon Mignolet, who had everyone worried when Gordon’s injury made him our starting keeper, has been superb. Elmohamady and Bramble have also been decent, Welbeck is promising and Angeleri is pretty much invisible (and impressing no one in his outings for the Reserves).

Dirk Kuyt’s goal last weekend brought plenty of discussion. What are your thoughts on the incident?

I described it as the beachball’s revenge. More ludicrous than that one though not quite as ludicrous as when Ferdinand’s dumb clearance ricocheted off Fabregas, injuring him in the process, and ballooned over Mignolet’s head into the net. Torres was not 10 yards away when the free kick was allegedly taken, the ref wasn’t looking and Liverpool’s sportsmanship can be questioned, but it was also a sloppy act on Turner’s part that I am sure he’ll never repeat.

Lee Cattermole has been sent off on two occasions already this season – is he being targeted by referees?

Referees are bound to be on the lookout for infringements on his part. But he has only himself to blame and has let the club down badly. My instant reaction to the second yellow and therefore his second red in three games was that he should lose the captaincy. Bruce clearly disagreed but it has to be last chance saloon.

What is your favourite Sunderland v Manchester United match?

I am so old my National Insurance number may well be 1. So I remember being a lad at the FA Cup sixth round replay in 1964, when the official attendance was 46,000 but at least 70,000 were estimated to have got into Roker Park. Crowds outside surged forward and forced open the gates. It was an astonishing (and dangerous) night on which two people died and terrible tragedy was waiting to happen. And we nearly won, just as we had at Old Trafford. But underdogs rarely get a third chance and you walloped us in the second replay.