John McCormick writes: I should have been there today but life got in the way, as it so often does. Instead, because I’m too superstitious to subscribe to Ifollow I’m making do with updates on various websites and awaiting mid-game texts from Pete Sixsmith (Rochdale very effective, we are less so came at half time) while watching Sky and listening to them praising Danny Graham.

Pete will be providing tomorrow’s report. From that half time text and the one below, sent just as the ref put his whistle down, it will be a gripping read 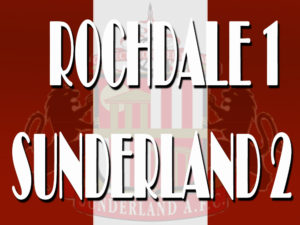 Next Post
Rochdale vs Sunderland: aiming to make it three wins in three