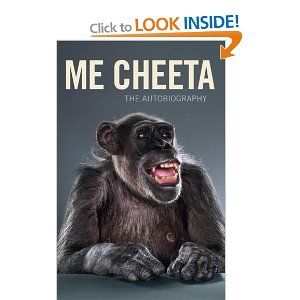 Only Leon truly knows if he was a cheater at the Stadium of Light. Some things are more certain: Cheeta, for example, was a chimp. And Pete Sixsmith clearly has too much time on his hands. Who would have thought being driven in disgust from a match at Highbury would lead him to an exhibition of the Tarzan star’s art? Or that he’d write about it in honour of the poor beast’s death?

At this time of year, when families get together sitting around log fires, toasting marshmallows and being sick in granny’s handbag, there are few things that go down better than a heart warming animal story. If it can be linked to Sunderland AFC so much the better.

We have seen Jarvis the Cocker Spaniel featured in the Sunderland Echo, The Northern Echo and on local TV the other night. Of course, the story of Jarvis and his erstwhile master, Billy Longhurst, first surfaced on Salut! Sunderland, after a frenzied bout of phone hacking, bone hacking and accosting Jarvis in the street.

However, there was a sad piece of animal news with a (very) tenuous SAFC connection, which involves the National Gallery, Stephen Wilson, Paul Danson and a barman from Close House.

Wednesday afternoon saw the end of the long life of one Cheeta, the chimpanzee, at the ripe old age of 81. Whether octogenarian simians display the same traits as humans of the age (holding up the Post Office queue whilst discussing ailments, driving 10mph below the speed limit and clogging up the bus network) is not reported, but he had a long and interesting life and was still flinging balls of poo at those who came to see him at his home in Florida – so not that different from many human 81 year olds.

Cheeta had starred in the Tarzan films alongside the former Olympic swimming champion Johnny Weismuller and Maureen O’Sullivan, later to be mother of Mia Farrow and mother in law of Frank Sinatra and Woody Allen (although not at the same time. He was the star of the show with his long arms, big grin and incessant chatter – and Cheeta was a good turn as well.

When his movie career ground to a halt, he took up painting, and despite a scurrilous piece in The Guardian stating that it was another chimp responsible for the daubings that brought him fame, he became a major player in the art world, cornering the market for pretentious drivel until Tracey Emin and Damien Hirst overtook him.

His Sunderland connection goes back to 1996, when four of us (me, Pete Horan, Stephen Wilson and the boy Nigel Wilson) travelled to London for a game at Arsenal. This was the Reidy “On The Cheap Side” consisting of the likes of Paul Stewart, Gareth Hall and Lionel Perez that should have avoided relegation, but didn’t, up against an Arsenal side welcoming Arsene Wenger to Highbury at the start of his tenure.

We arrived in London early and headed for the National Gallery in Trafalgar Square in order to give the Wilson Boys a bit of cultcha. Stephen was amazed by the paintings on show, particularly the abstracts, and commented that a chimp could paint as well as that. We gently pointed out to him that this indeed was the case as we had wandered into a room made up of paintings by Cheetah the Chimp.

From that moment on, Stephen became an aesthete of the highest order and almost sacrificed the lunchtime session in The Lamb in order to attend Brian Sewell’s talk on “Simian Painting and the Career of Sir Anthony Blunt”.

Once at the game, we went our separate ways and Pete and myself took up our seats in the West Stand, surrounded by Arsenal fans. The game was progressing at a stately pace when the referee intervened and sent of Martin Scott and Paul Stewart for having the temerity to tackle an Arsenal player and inadvertently handle the ball.

Down to nine men at half time, Mr Horan and myself decided to attack the wall in the Gents’ toilet and then chose to return to The Lamb, where we quaffed several pints and several Bushmills Black Bushes, while chatting, indeed slurring, at the bar man who was a native of Close House and had known the legendary Billy Reilly.

News filtered through that we had lost 2-0 and when The Wilson Boys, Derek Poskett, Sobs et al returned, we were in a boisterous state. It is best to draw a discreet veil over the train journey home and the subsequent hangover.

So, two animal connected Sunderland stories in a week, but there was also some disappointing news in that were regarded as one of the least exciting and interesting teams in the Premier League. We weren’t as bad as Stoke or Wolves but we were pretty bad and the stats in this morning’s Guardian do us no favours.

The only lists we appear in are Most Dribbles (Sess is joint 4th. with 85; he shares the spot with N’Zogbia), Most Times Woodwork Hit (joint 5th. with seven; Liverpool head it with 17 – plenty of moan time in that for Dalglish) and Most Shots By Team (9th with 185, squeezed between Wolves and QPR).

None of our players gets in their Team of the Season, which is populated by rubbish like Modric, van Persie and Silva and we don’t even get in the Second XI, which has a serial half wit Steven Taylor in it.

So a disappointing end to 2011, which has seen us beat Blackburn, Wigan and Stoke at the Stadium of Light, appoint the one manager that nobody would quibble about (yet) and begin yet another new era. Onwards and upwards as they say – which probably sums up Cheeta’s position now. RIP great ape!!

5 thoughts on “Soapbox: forget Osman, this Cheeta was a chimp”

Next Post
The SAFC-Manchester City ‘Who are You?: no premature lording it over United