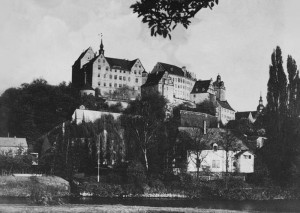 Here’s some off-the-wall nostalgia to justify a reminder of a new fantasy league, run by ProSportex.com. You still have time to join in the knowledge that Salut! Sunderland has thought of a worthy cause that would benefit …

In days gone by, I took it upon myself to run a fantasy league and a pools syndicate at work.

The syndicate was only a few weeks old when it won with a first dividend. Unfortunately, it was also a week when there were so many draws that so did an awful lot of other people.

The same thing had happened when I was a kid. “Don’t tell anyone but we’re going to be rich,” my mother had said as I was packed off to Sunday school. By the time I’d got to the Wesleyan church 15 minutes away by foot, I’d told about six other children. The whole of Shildon probably knew by midday. And my dad’s share turned out to be all of £8, a quarter of the £32 winnings.

My own syndicate, years later, was a little luckier. On the day the dividends were announced, I was on a trip to Colditz with a group of ex-servicemen who had been incarcerated there during the Second World War.

I cannot remember the piece I wrote but do recall being boyishly chuffed to have been able to dictate a story to London from inside the notorious old castle. When I checked in with the news desk, a colleague said: “Never mind that, they’ve announced the pools dividends and we need to know: was it Littlewoods or Vernons?”

I couldn’t blame him. The Vernons payout was, as ever, pathetic and there were 19 members of the syndicate. Littlewoods it was. So we each pocketed £300, hardly enough to emulate Vivian “Spend, spend, spend” Nicholson’s exploits but a handy little sum all the same (wiped out, in my case, by a whacking garage bill for repairs to my old Renault 21).

The fantasy league was just a spot of fun. We each chipped in a couple of pounds to produce a small prize for the winner but, I began to lose interest when I slipped behind colleagues as my useless team, immaturely called Mag Free Zone in recognition of my declared selection policy, headed towards the bottom of the table. I know a lot of people play fantasy football on sites like https://www.draftkings.com/fantasy-football during football season and I can see why they love it so much, despite not coming in first place.

All of which leads to news, or rather a reminder, of the fantasy league run brought to Salut!’s attention.

In brief, it works as any other fantasy football league, gaining points based on a player’s real-life performance but has one essential difference: what the organisers call a live transfer centre enabling users to set their own prices they wish to buy and sell players for. “All trading is done between users,” I am told, “creating a completely new challenge and more authentic experience.

If you are tempted, please go to ProSportex.com, pick your team. Please enter the word “salut” in the “access key” section to show you came from here. But don’t worry: that won’t make me rich either!

In fact, the first slice of the small benefits I expect to result from Salut! Sunderland participation will go directly to the foundation set up by our former midfielder, the excellent Claudio Reyna, to broaden access to football in the USA and to which he recently invited donations in memory of his 13-year-old son, Jack, who died recently after a brave struggle with cancer.
Check out the foundation’s work at http://claudioreynafoundation.org/claudio-reyna-donate.html.