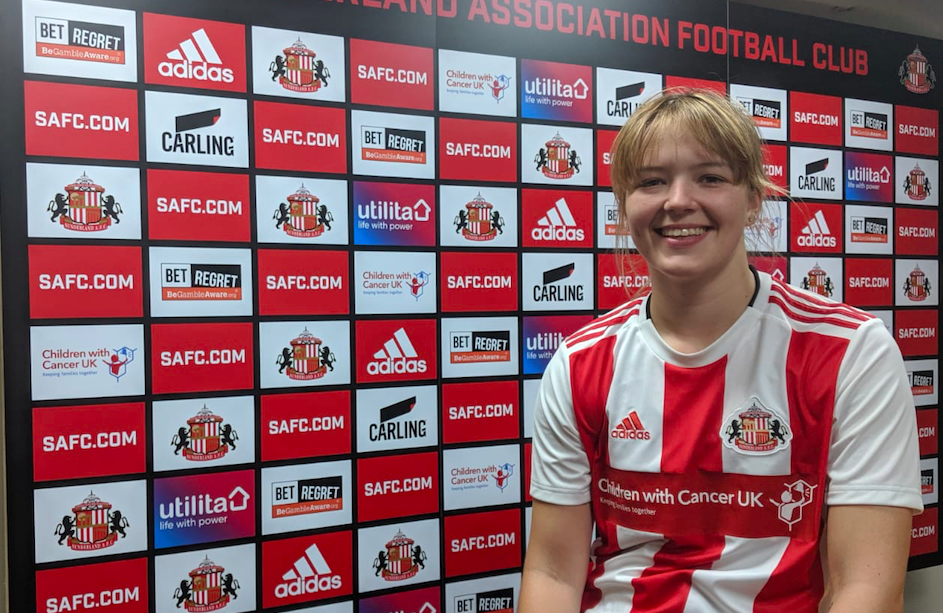 Sunderland Ladies really are a superb side to watch. I’ve enjoyed every game I’ve been to, and as the season moves to it’s conclusion, the games are only going to get more tense and more dramatic. The Ladies are working towards a league and cup double. That’s my thoughts on the Ladies team, however, as I found out when Sunderland Ladies goalkeeper Claudia Moan, kindly took time out of her day to speak me, she’s focused and taking one game at a time.

Moan is a player I’ve particularly liked watching this season. In football, I’ve always thought that you don’t win anything without a quality goalkeeper. Sunderland Ladies have got one in Moan, don’t worry about that. She signed in July last year, having previously been at rivals Newcastle. She’s focused and ambitious and I get the feeling she’s not the only one, in this strong minded, hardworking and technically gifted side.

As as goalkeeper of 21 years of age, she’s got a long career ahead of her. She explained that a full time career in the game is one of her many ambitions. There was no hesitation from Moan, when asked, about how she approached pre-season with the Ladies.

‘I was going into it looking to improve in every session. I wanted to play regularly this season. It was really hard, but so enjoyable’.

Speaking to Moan, and having watched the Ladies this season, it’s clear to see these girls aren’t afraid of hard work. What’s impressed me and the rapidly growing ranks of lasses fans I’ve spoken to, is the quality in every area of the team. This is isn’t a side that relies on one or two players. This is a team oozing with quality.

When she was asked about her toughest tests this season, she quickly replies.

‘Birmingham definitely. Nottingham Forest too, they were straight at us. The weather was bad too. Stoke was another hard game’.

When asked about who she’d include in an all star 5-a-side team, she paused. The answer shouldn’t have surprised me. I’d said, no Sunderland Ladies players allowed. I could tell she wasn’t entirely comfortable with the question. I knew what she was thinking, so I said ok, including your teammates. She immediately started listing players from her side. That for me, tells you all you need to know about the team spirit and togetherness that brilliant team manager, Melanie Reay, has fostered within the lasses camp.

When asked about the many strengths of her game, she was typically modest.

‘When I’m playing my best, my distribution. Starting moves from the back’

I excitedly interrupted with shot stopping. Anyone who saw the save against Southampton, in the cup semi final, would agree with me on that. When she was asked what message she’d give anyone who was thinking of coming to watch for the first time. She replied

‘really enjoy it. It’s a really positive atmosphere. Once you’ve been, please spread the word to other people.’

Moan was happy to tell me about what else contributes towards the incredible team spirit in the camp.

‘Charlotte Potts and Georgia Gibson are great for positivity and Mel Reay can be a laugh with the things she says.’

What advice would she give aspiring young girls or boys on goalkeeping.

‘Don’t give up. Don’t let anything get you down. Positive thinking.’

Our conversation turned to the Sunderland Ladies support.

‘They’ve been great. The fans have been enjoying the games. We’re thriving off it’.

Claudia lives and breathes football. If she’s not playing or training for the lasses, she’s doing the same for her university. She’s also got her studies, which she’s due to complete in the coming months. When it’s not the football season, she trains with a personal trainer to keep fit for the season ahead.

She counts the people who have a a big impact on her career so far.

‘My Mam, Dad and my two older brothers. They help me have a positive mindset and to push myself on’.

What are her thoughts on her, and the lasses, for the future.

‘I would like to see us get promoted and to win cup finals. I would love for us to have more and more support and for more funding’.

Moan and the rest of the team have a testing end to the season. Who would bet against a league and cup double for Sunderland Ladies? Not me. 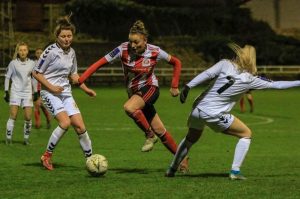 SAFC Ladies – Well worth a trip to see them in action