Pete Sixsmith is on leave. In his place, Benjamin the Donkey interprets his thoughts … unless it’s Sixer in disguise

As is well known around the area, we donkeys are noted for our cynicism and unwillingness to believe that, to quote the song, “Things Can Only Get Better”.

The general consensus amongst we members of the Equus Asinus family is that things rarely do get better and more often end up a damn sight worse.

So, it was with some trepidation that we were gathered together to listen to a radio broadcast on the local BBC station this evening. It was hosted by a human called Simon Pryde, assisted by one of the farm’s earlier heroes in Marco Gabbiadini and they had a full 90-minute session with the two men who now constitute the ownership of our beloved farm, Stewart Donald and Charlie Methven.

There was a bit of a flutter as some of the younger members of the community sat at the front and cheered when Messrs Donald and Methven spoke. They were immediately told to “be quiet” by their elders who wanted to listen to the specific details of what they said and perhaps more importantly, gauge a little bit about their characters from how they spoke.

As an elderly donkey (remember, none of you has ever seen a dead one), I have rarely heard an owner speak, let alone do so on a phone in programme. Syd Collings was an Olympian figure who glided from his upmarket Humber into the board room, Tom Cowie, Conservative and capitalist, treated the occupants of his farm with contempt, while Bob Murray spoke carefully and softly and was very good at choosing gold bath taps for the new farm buildings in 1998. 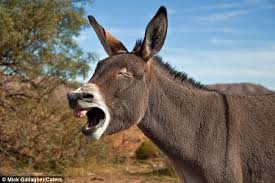 In Niall Quinn we had an articulate and loquacious frontman who was forever talking to supporters, be it through BBC Newcastle, at the EasyJet desk at Cardiff airport or at various supporters’ meetings in the early days of the Drumaville consortium.

As for Ellis Short, I don’t think that any of us knew what he sounded like as his instructions to the workers and supporters were passed on by Niall and then by a disastrous Irish lawyer, followed by a Scot who was sent to attempt to stop the farm from haemorrhaging away.

So, what impression did the new men make? Did they leave us feeling optimistic? Did they give us some indication of the direction that the club was going in? Did I, that most cynical equus assinus, give them a hoof up or a hoof down?

Well, comrades, they get a hoof up from this ass.

* They engaged with the presenter and the callers.

* They did not duck any questions (Malcolm the Mallard says that this is not a derogatory term).

* They sounded a little bit surprised that they had gravitated from Eastleigh and Oxford United to Sunderland.

* They sounded as if they knew what they were doing.

Stewart Donald was open and honest and gave us an indication of the state of the farm. It is debt free. Baron Short, pantomime villain and previous owner of the farm, had absorbed the overall debt, leaving Farmer Donald with something to work on.


The parachute money was used as security for the loan, seeing as the local building society was reluctant to lend £40m. for a farm that was about to go under. So, Baron Short (boo, hiss) will get some of his money back assuming Stewart and Charlie make a go of the business.

Farmer Donald had a rural Oxfordshire accent and had clearly spent his early days wearing a smock, chewing a straw and falling off gates. Farmer Methven was quicker and sharper due to his Eton education and struck this humble donkey as being able to cut to the chase quickly, as befits a former journalist and current owner of a PR company.

It was he who had instigated the talks with Baron Short (more boos and hisses) over breakfast and he had been offered the club by the departing Missourian. Mr Methven was thus able to exchange his role as a PR man for that of the sole director of a much-loved farm in the north east that was close to having its mortgage rescinded.

What else did they tell us? Offers for our current players were being made as we listened. A derisory offer of 3m euros for one had been raised to 7m. Players who were under contract would only be sold if it was for the good of the club. Jack Rodwell was subject of a £27m bid from Manchester City (maybe I misheard that one).

They had every confidence in the new manager, another educated man and were sure that he would do well. But no rash promises were made. “It may take us two years to get out of this league” said Charlie, while both initially looked to the Championship rather than the Premier League.

They had both spoken to people in the game who suggested that, if they were going to buy the farm, a young, thrusting manager like Jack Ross was essential, so they went and got him. They were also told that the likes of Kevin Ball should be used more and that was something which they had in hand.

The Premier Concourse would not be open this year but if demand was strong it would be in the future. They thought that next year’s strip was an improvement on the current abomination, which is damning it with faint praise. They wanted to make the matchday experience better; it was suggested that winning a few games might do that. They agreed that that was more important than the music the team came out to.

Farmer Donald said that he was waiting for the EFL to complete due diligence on Juan Sartori, a potential third investor. He is a Uruguayan, married to the daughter of the Russian owner of AS Monaco. As a Uruguayan, he likes football; the saying goes that “other countries have history; Uruguay has football.” It looks as if he is worth a bob or two. He is the only other investor that Donald has approached.

As the broadcast finished, there was a rousing chorus of The Lambton Worm which I joined in with some enthusiasm.

It may all go wrong, and it may all end in tears. We shall see. But the early impressions are good and, with Jack Ross now officially ensconced in the farm manager’s office, we look forward to the new season with a lot
less trepidation than we did two months ago.