Pete Sixsmith sent a bonfire night seven word text concerning the probability that we wouldn’t be making a trip to Wembley in the EFL Trophy.  Tonight’s match provided an opportunity to keep the flame alive. Pete was watching  Spennymoor beat Boston  so I coined a seven-word text of my own not long after  Luke O’Nien crowned  a pathetic display which ended an apathetic group stage.

Then, at the final whistle Pete popped up with his own seven words. You can see his and my thoughts below: 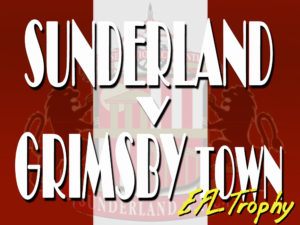 Was it inevitable that despite sacking Jack Ross, Sunderland still contrived to go behind to opposition they should be walloping? What happened to No Manager Bounce?

Well, it bounced. The same resilience we showed on better days under Ross surfaced and goals from Watmore – welcome back – and McNulty put us ahead. There wasn’t even time to think of a late flurry of SAFC goals as Grimsby drew level immediately courtesy of Pete Sixsmith’s regular companion. ‘appalling defending’. We were spared penalties – and blushes – by a good Sunderland move, Hume’s cross headed home by Will Grigg. A first step back to Wembley of the EFL Trophy (aka Leasing,com)?

What you see below is Sixer’s instant seven-word verdict. One of 6,952 souls present at the SoL, he’ll be back with more …

Trust it to be on an especially dismal weekend for Sunderland supporters for this site to work just as it should: loads of readers, strong comments from our fans, appreciation from opposing supporters and, so far as Monsieur Salut can tell, no sign of the Turkish hackers.

It will hardly cheer up Pete Sixsmith to know “Clanford”, at this Lincoln City fan forum ensured a lot Imps fans would read his brilliant if depressing account (see it here if you missed it). Another City fan, Brendan Bradley, added this comment: “If there’s one sentence that applies to 100 per cent of football supporters though it’s this one: ‘as often happens, the game spoilt a pleasant day’.”

Another game looms before the international break and you will see if you read on that your thoughts are invited on how it will go. It is only the EFL Trophy, uninvitingly entitled Leasing.com Trophy for sponsorship reasons, but remember that as the equally mundane Checkatrade Trophy last season, it did get us one of those losing outings to Wembley we seem to specialise in.