Monsieur Salut writes: tomorrow night, should France do what logic expects and defeat a Portugal side that has won only once in normal time on the way to the Euro 2016 final, the country will be en fête. But the same will go for a part of Sunderland that is forever French.

Salut! Sunderland found a Sunderland-supporting Portuguese fan, Sam Verissimo, for the first of these special Who are You! interviews. Now it is the turn of FrenchFancy1971, as she calls herself on Twitter, Véronique Laniel as she is known in real life, a product of Saint-Etienne – where the film version of Sunderland, the hit Paris play, was relocated – but settled on Wearside with the Red and Whites firmly lodged with Les Verts in her heart. She warns us ‘to read this with a French Mackem accent in mind’ … 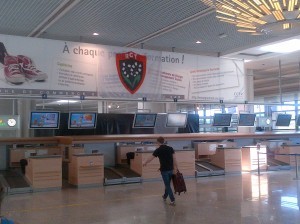 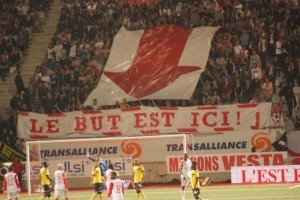 Like many others who watch French football, I have a soft spot for Auxerre. Not just because I love Burgundy, but because the football team – they were managed for 36 years by the same man, Guy Roux – seemed for so long a stable fixture of the French game.

Tonight I found it in my heart to loathe them, before remembering that even if a team has a big toerag element within its support – fill in the missing letters in M***w**l or L***s or C**d*f* – it is necessarily a toerag club.

With their barrages of tennis balls and toilet paper, a significant minority of Auxerre fans to be known from now on as la racaille or les voyous twice stopped the game against Montpellier. This could have swayed the outcome of the championship since all matches kicked off the at the same time. The effect on Montpellier players’ nerves must have been unbearable.

Most attention in French football, providing welcome distraction from the elections, focuses today on the Premier-style movement at the top, where moneybags Paris Saint-Germain are again threatening to tear up the fairytale script that would have Montpellier as champions. And once-mighty Marseille’s first Ligue 1 win in centuries, Loic Remy grabbing the only goal at home to far-from-mighty Nancy.

I prefer to look forward to tonight’s game and hope for a Dijon victory over Auxerre.

Do not worry. Salut! Sunderland is not about to test your digestive systems with another reference to andouillettes, re-encountered on a recent trip to Paris to catch Sunderland the play.

The clip appears as a mark of respect to the supporters of Montpellier – Montpellier Hérault Sport Club in full – who made the long journey to Paris at the weekend and were rewarded with a 2-2 draw against moneybags PSG to stay within a point of them at the top of Ligue 1.

They came up with the marvellous chant at the Parc des Princes:

The first bit is easy, simply reflecting the present ownership of Paris Saint-Germain.

The second – le gros lard meaning fatso – honours one Louis “Loulou” Nicollin, president of Montpellier and seemingly a man who ate all the pies, and probably Desperate Dan’s cow pies at that, followed by all the chips, all the Big Texans, all the McDo quarterpounders and all the pâtisserie and ice cream, washing it down with gallons (or, this being France, multiples of 4.54609 litres) of non-diet cola.

Sadly, Loulou – weighing in heavily at number 311 on France’s rich list, thanks to our need for waste handling businesses of the type he runs so successfully – was not present at the stadium to enjoy the tribute to his girth. He planned to go but, fearing his attendance was all too often fatal to Montpellier’s chances, decided at the last minute to watch it at home, alone.

Since this is the first French Fancies for a while, let me bring you up to date. After PSG and Montpellier at the top come, some way behind, Lille, Marseille, Lyon and Saint-Etienne, the team for which Steed made just one substitute appearance before handing in his notice. He might at least have waited in case there was a walk-on part for him in the film to be made of Sunderland the play but with Saint-Etienne the setting instead of Wearside.

At the bottom, poor old Nice – having ditched our own Eric Roy in November – are stuck on 20 points with FC Sochaux-Montbéliard, but sit just above them on goal difference. Patrice Carteron, once the scorer of a goal for Sunderland against Newcastle United, continues to confound my gloomy forecast at the start of the season, his promoted Dijon side currently 13th, five points clear of the drop zone.

And in Ligue 2, because Pete Sixsmith likes to know about these things, we find Bastia, Reims and Clermont Foot in the promotion places with Sess’s old club and Monsieur Salut’s own city-in-law, Le Mans, fourth bottom – after just missing promotion last season – and hovering perilously above Boulogne, Monaco (how the mighty have fallen, Your Serene Highness) and Amiens.

But the week, and therefore French Fancies, belongs to Loulou, our favourite fat man.

Out of the Light, into the Cauldron … Salut! Sunderland offers thanks and best wishes to Steed Malbranque …

M Salut and M Malbranque can talk freely over a good bottle of sturdy Côtes du Rhône without fear of complaint from me if he happens to be chainsmoking Gauloises throughout.

We’d be able to agree that this football business can be, not to mince words, merdique. You win a place in the hearts of most of the fans of your club only to be sold on during some restructuring programme that leaves you “not featuring in the boss’s future plans”.