This is the weekly digest of what has been going on at Salut! Sunderland for readers in a hurry. It started as most weeks do these days, scratching heads and pointing fingers after one more defeat to add to our growing collection. But there’s been much, more more …

There has not been much to cheer us up of late. So you may wish to skip all the navel-gazing that went on after the 2-0 defeat at St Andrew’s, when we were simply unable to turn our dominance for much of the game into a goal or two.

French women are doing OK, but there’s mixed news of the footballing men of Salut! Sunderland‘s choice. Here’s another of our looks at French football …

Since a lot of readers are coming this way from the Sunderland Women’s Football Club site, thanks to a terrific piece Rob Hutchison wrote here about a women’s game he attended and which has been flagged there, I ought to cross the Ts on the Arsenal v Lyon semi-final of the female equivalent of the Champions’ League.

No apologies for repeating the clip showing two beautifully taken goals by Lyon’s Lotta Schelin in the first leg at the Stade de Gerland. Two-nil up, they gave themselves a decent cushion for the return leg just outside London – and well as making me think Steve Bruce could do worse than sign Lotta on emergency loan to play alongside Asamoah Gyan for our remaining games.

That’s the Sunderland Women’s Football team you can see. Their exploits deserve more publicity (as well as a fairer deal from the FA). French media, on the other hand, gave good coverage to the Lyon women’s team which beat Arsenal Ladies 2-0 in the first leg of the Champions’ League semi-final with two excellent finishes by Lotta Schelin (*see footnote for clip). More than 20,000 turned up at OL’s Stade de Gerland; let us see whether the Gunnerettes can overturn the lead in tomorrow’s return game in London. To Rob Hutchison, the notion that women can actually play quite well is relatively recent. But he’s a convert …

For years, I’d scoffed at the thought of girls, yes girls, playing football.

They ain’t strong enough, they can’t tackle, they can’t kick a ball properly, they can’t head it, they’re too soft. All are comments so often heard when “blerks” talk about women’s football. But gradually the profile is rising, with more internationals on free-to-air TV and more and more media coverage. 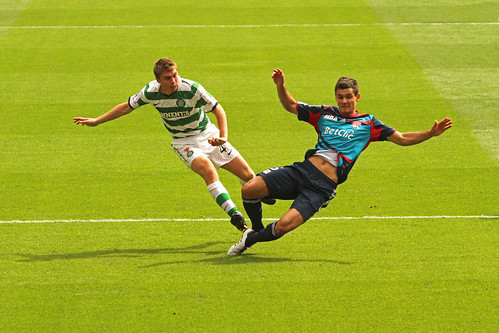 In all the current transfer talk, one subject occupies ‘s attention more than most: the future of a player who excelled in South Africa, just as he did – when fit – for Sunderland last season. The signals from the Stadium of Light are mixed …

Steve Bruce was in understandably dismissive mood when presented with a list of the players he is allegedly trying to sign.

Whatever Franck Ribery, Karim Benzema and Sidney Govou did or did not get up to after tiring of all those discussions on Molière, Voltaire and Baudelaire with young Zahia Dehar, there are still football issues to decide in France …

Forget (for a moment) the sex scandal. Forget Thierry Henri’s outrageous handball against Ireland (and at least Ribery & & co have taken the heat off him ahead of South Africa).