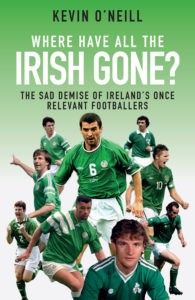 Kevin O’Neill is an Irish football writer who knows his subject. In a new book, he traces the declining role of Irish players in England’s elite clubs. Since his research covered plenty of Sunderland-related content, we invited him to introduce his project ….

With this book, I recall better times for the Irish in England’s leading clubs, largely before the introduction of the Premier League and subsequent influx of foreign players.

Sunderland supporters are fully aware of their club’s own strong links to the Emerald Isle, a bond that continues today with Aiden McGeady and John O’Shea members of Simon Grayson’s squad. Among the Irish stars whose careers I review are Niall Quinn, properly seen as a Sunderland hero, and the man he later – when chairman – appointed as manager, Roy Keane.

There’s an interview too with another former Sunderland boss, Martin O’Neill, and former club defender Mark Rossiter – [he didn’t play much for us but was there when I saw us beat Arsenal 3-2 in a League Cup game at Highbury – Ed] as well as an interview with Sunderland fan Martyn McFadden, editor in chief [crikey Martyn, that’s a grand title – Ed] of A Love Supreme.

My origins are in the Irish midlands town of Athlone, a place familiar to Sunderland supporters through pre-season visits.

Firstly, I wish to thank everyone who helped me get the book to this stage, and particularly past and present players who gave me their time. They provided invaluable insight and experience into what it’s like for Irish players, young and old, to be part of English football.

The result, I hope, is a factual, hard-hitting account of what has happened to the Irish in top-class English football over the past 20 years.

I try to find out how and why their fortunes have deteriorated so dramatically – and quickly – while also recalling better times when the Irish triumphed in England with great regularity.

Through a series of face-to-face interviews with current and retired players, the book describes how young Irish teenagers fend for themselves in the cut-throat world of Academy football and considers those who have fallen by the wayside in their pursuit of fame and footballing fulfilment in England. I pose the question of whether the Irish can ever again prosper at English football’s most successful clubs.

* Where Have All the Irish Gone? The Sad Demise of Ireland’s Once Relevant Footballers will be released by http://www.pitchpublishing.co.ukon October 16 2017, is priced at £12.99, and will be available to purchase at Amazon, Waterstones and various other book stores and platforms to be confirmed.

The publishers say the book tells a story of dramatic decline, an ‘ultimate riches-to-rags affair’ in which Irish players have largely become irrelevant at the top English clubs.