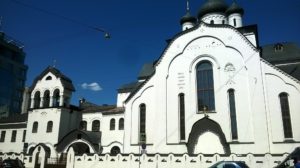 Monsieur Salut writes: 0ur summer faithful will have noticed that I invited contributions from any reader who happened to be in Russia for the World Cup. No takers so far until Andy Falconer, not even a SAFC fan (he supports his home town Boro, where his mum – my sister – has lived all her adult life), was more or less pressganged into promising some occasional jottiongs.

Andy is well known to those who devour our Who are You? series, having contributed some fine responses last season – (‘Newcastle fans are noisy; Sunderland’s are noisier’).

This first item is really just a scene-setter. We’ll see how much else my nephew can provide once he starts seeing some football (which doesn’t seem to have happened for him when Russia enjoyed some shooting practice against Saudi Arabia, though he must have found a bar where he could watch it) …