Denise Hone*, ChelseaD from The Chelsea Blog, has been here before, but without the real name. She previewed our great win at Stamford Bridge last season and – despite that – agreed to have another go at the Salut! Sunderland questions ahead of Saturday’s return to proper, post-international football. Denise does her “biggest pessimist” credentials no harm as she offers interesting responses on a range of issues from changing places at the top of the Premier to her Chelsea loves and hates, cheating and the weather up north …

Salut! Sunderland: You obviously saw it coming, last season’s 3-0 win for us at your place? Explain it all the same!

I saw defeat coming, maybe not 3-0 to you but it was on the cards. We’d started the season so well after a rubbish pre-season but as every game went on cracks started to appear and the wins were less convincing. It was always a matter of time before the wheels came off – and when they did, it was no Formula One pit stop.

And then the natural order of things was restored at the Stadium of Light. These, surely are games you ALWAYS expect to win

Not really, I don’t ever go into a game with that sort of attitude. Amongst Chelsea supporters I’m probably the biggest pessimist there is and that’s served me well on many occasions. If you expect nothing, then anything you get is a bonus.


Manchester’s free-scoring success and Arsenal’s shocking decline have dominated the headlines so far this season, How strong a title challenge will Chelsea muster?

Well you’re asking me this off the back of City battering Spurs and United making sure Arsenal shirts are firmly tucked away at the back of a cleaning cupboard somewhere, so it’s fair to say I’m not exactly brimming with confidence.

With all your money, and the advantage of being in London, you should really be in pole position to attract any player who fancies the Premier. How happy are you with the ins and outs of Chelsea’s transfer dealings?

I’m ok with it, I never expect us to spend silly money anymore and whilst I admit I liked the idea of getting Modric, I didn’t want us made mugs out of. Coutois, Lukaku, Romeu and Davilas are players for the future, so hopefully this means AVB will hang around long enough to actually play them. As for Meireles, let’s see if he can convince me shall we?

Being honest rather than just loyal, what will be this season’s top four in order – and the bottom three?

I’m sure Chelsea featured in one of those lists (!). Where will Sunderland finish and who will win the FA cup, Carllng Cup and Champions’ League?

I think you’ll probably finish just inside the top ten. FA Cup and Carling Cup we’d have a shout in, if not possibly United or City. Champions League – Barcelona.

I cannot remember whether I asked this last season: are you old enough and sufficiently long-standing a supporter, to have watched Chelsea in gloomier times?

Unless I was a teenager that would be the case anyway, but since I’m not a teenager, yes I was there when we were s***!

Do you think there is still a lot of negative feeling towards Chelsea from neutrals or has your style of football – plus the spread of the moneybags culture to other clubs – made people more appreciative/less hostile?

I wouldn’t say more appreciative but I’m led to believe they’re less interested because we’re not seen as a club posing the same sort of threat we have done. 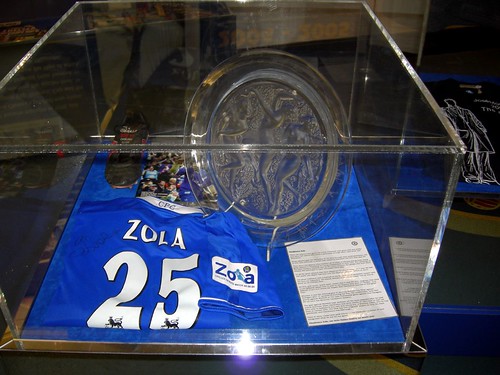 Who is the best player you’ve seen in a Chelsea shirt, who would you like to see in the shirt now and who should never have been allowed anywhere near it?

Best player for me has to be Gianfranco Zola, a true professional on and off the pitch and just such a pleasure to watch. Like most supporters I’d probably give my right arm (and left) to see Messi in a Chelsea shirt. As for players who shouldn’t have had the shirt on I’d like to say Bogarde but he barely got it on his back anyway, so probably a player who made me want to punch him out of sheer frustration, like Sutton or Fleck.

What is your view of Sunderland – the fans, the club, the city the region?

Only been there twice and I came away feeling the same way both times, bloody cold! That aside, I can’t say I’ve ever had a major view either way although I think Bruce is doing a good job there.

The Barton Question: which form of cheating irks you most, who do you regard as its worst perpetrator and what should be done to stamp it out along with other forms?

Obviously diving, there’s no place for it but I don’t think you can single any one player out as the worst because plenty do it – they just don’t all get the same press attention. Goes without saying Didier Drogba is well known for it but Nani, Gerrard, Suarez, take your pick whether any of them are actually worse than the other. As for stamping it out, that’ll never happen entirely but some consistent refereeing decisions wouldn’t go amiss.

What one thing should Chelsea FC or the authorities do to improve the lot of ordinary people attending games?

You mean supporters? Well for the most part it comes down to money I’d have thought. If your average supporter wasn’t priced out there’d be fewer tourists.

Will you be at our game? What, if not already answered, will be the score?

No, I won’t be there. Stuff changed for me a few years back now, so I don’t get to go like I used to – that’s life. I never predict scores, far too superstitious.

Denise Hone on Denise Hone:
I much prefer talking about Chelsea – I’m ChelseaD from The Chelsea Blog, otherwise known as Denise. Chelsea is what I was brought up on, I’ve often said that growing up in my house you either supported Chelsea or were put up for adoption, as simple as that really. Fortunately I was happy enough with that arrangement. I’m probably one of our most cynical supporters and make no apologies for it, I blame the darker days (thanks Dad) and pray they don’t return!

3 thoughts on “Chelsea and the new order: ‘above Liverpool, beneath Man Utd & City’”

Next Post
Bravo Sheffield, Southampton & Portsmouth: in the pink with Sunderland