John McCormick writes: I made it down to Cardiff in 1971 or 2, via the Heads of the Valleys Road, one or more pubs in Aberdare and Tonypandy’s Pandy Inn, but in February 1972, where Pete resumes his travelogue, I was half-way through my undergraduate career and finding respite from academic life (mine involved the use of sterile mating in insect control) in five-a-side during the week and the pubs and depths of Yorkshire at the weekends*.  Going to this game never entered my head. Luckily, it entered Pete Sixsmith‘s and he now begins a two-part edition of his outstanding series, The First Time Ever I Saw Your Ground

It’s February 1972. I am in my final year at Sunderland College of Education, struggling to complete (let’s be honest, start) my history dissertation on Chartism in the North East, while trying, and largely succeeding, to drink my way through the college bar and various pubs in the (then) town centre. The team were doing reasonably well in the Second Division under Alan Brown. Captained by the excellent Martin Harvey, there was a good mix of young players (Kerr, Hughes, Tueart, Pitt), a couple of astute buys (Malone, Watson) and one or two who showed promise but who couldn’t quite make it in red and white stripes(Coleman, Chambers).

The third round of the FA Cup had sent fellow Second Division team Sheffield Wednesday to Roker and the Owls had skulked back down the A1 after a 3-0 defeat. Goals from Ian Porterfield, Dave Watson and Brian Chambers had put us into the Fourth Round for the first time since 1968. We looked for a good draw at home – and got Cardiff City away. City were in the same league as us, although they were nearer the bottom than the top/middle. It was a long way in those days, when the motorway system was nowhere near as extensive as it is now. The Severn Bridge had only been opened for a few years but it was an overnight trip and I had little enthusiasm for a long, uncomfortable coach journey. The news that the club were going to run a special train was greeted with whoops of delight in Room 29 in Williamson Hall.

My youngest brother who, with the help of his schoolmate Paul Dobson (aka Sobs), had been weaned away from being a Liverpool fan, decided he wanted to go. My father, obviously full of Whitbread Trophy from the Bay Horse at Middridge, agreed and the tickets were booked. Michael came to stay with me for the night and we were up bright and early to walk down to Sunderland station for the train.

Sunderland station is not a pretty sight. Indeed, Matthew Engel, in his book Eleven Minutes Late described Sunderland station as “a dungeon, in contrast to Hudson’s Athenaeum at Monkwearmouth which makes even Birmingham New Street seem like the gardens of arcadia,” and it looked even grimmer in the cold light of a Saturday morning.

The huge English Electric Delta pulled into the Dungeon with its blue and white carriages and a horde of Sunderland supporters piled on. There was a fair amount of snow on the ground as we moved down the line via Seaham, where more were picked up and then we pulled in to Hartlepool for our final stop. And stop we did. For a long time. And then the news filtered down the train that the game was off. The train turned round and off we popped back to The Dungeon.

We walked to Ninian Park, stood in the corner of the Grange Stand where the view left much to be desired. We saw the following teams line up; 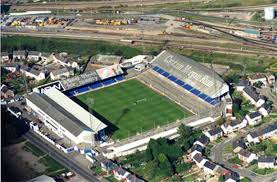 Ninian Park was a decent stadium in those days. It was familiar to many of us as it was used by the Welsh FA for international games and it had a stand with Captain Morgan’s Rum emblazoned on the roof, presumably for the benefit of passengers landing at Cardiff airport. It had a large capacity as well, with a record attendance of 62,634 for a Wales v England game in 1959.

There was a healthy crowd of 27,008 in the ground this night to see the conquerors of the two Sheffield clubs (City had beaten United 3-1 at Bramall Lane while we were seeing off Wednesday) and most of them calonogwyd loudly as Peter King put the Bluebirds ahead. However, they were llai hapus when Brian Chambers calmly tucked away a cic gosb in the 66th minute.

The journey home was a long one and I don’t doubt that lectures were avoided the next day (as if I needed an excuse) and we awaited the draw for the next round with bated breath. It was broadcast on Radio 2 at 12.30 and introduced by the urbane Bryon Butler and it threw up Leeds United at home, a great incentive for both sides. We wanted revenge for 1968, City wanted revenge for Cymru. As a result, the replay was much anticipated.

It took place on a Monday afternoon, due to the Heath Government imposing a three day week on the nation in response to the National Union of Mineworkers going on strike. Football matches were not exempt from this and County Durham (this was before the abomination known as Tyne and Wear was created) had its three days of electricity later in the week. On the Saturday we had beaten Oxford United 3-0 at Roker in front of 15,368 (Tueart(2), Porterfield); two days later, on a Monday afternoon, 39,348 piled into Roker to see Cardiff take the lead through Brian Clark and Bobby Kerr equalise with three minutes to go with a thundering shot from the left. Not many ships were riveted on the Wear that afternoon. There was a second replay two days later at Maine Road, where 8, 868 turned up (including a mini bus from Sunderland College of Education) and where Cardiff progressed 3-1. It was all a bit of an anti-climax.

The last time I went to Ninian Park was a grisly coach journey in March 2007 when a Ross Wallace goal gave us a 1-0 win and extended our unbeaten run. That team had the likes of Dean Whitehead, Jonny Evans, Grant Leadbitter and Danny Simpson in it. All four would be more than useful now…..

If there is any copyright claim, not answered by ‘fair use’ exemptions, on the images and videos used to illustrate this report, please make us aware and we will add credits or remove as requested.

*I’m sure I did get to some games. I just can’t remember any of them.

3 thoughts on “The First Time Ever I Saw Your Ground: (part 1) Cardiff City’s Ninian Park”

Next Post
Cardiff City Who are You? ‘I wouldn’t write off Sunderland completely’