Monsieur Salut writes: a slightly troubled search for a Port Vale fan for this week’s Who are You? finally led to three offers of help. Rob Fielding*, who runs the onevalefan.co.uk fan site, then turned around the questions as quickly as anyone in the history of the series and we are deeply grateful to him

This is what his fellow-Vale fan Tony Boulton, a Burslem boy in Texas, has to say: ‘Rob is a great bloke. He’s been working on his website for over 20 years, since the emergence of forums. Despite the very nature of fan communication, in the age of social media, he has persevered and kept it under control with an amazing level of integrity. Our history does not bear comparison to Sunderland, but we are two tiers below where we would like to think we can be. Football has changed so much, but the mid 90s was our heyday and if we never see that success again, we did make it to Wembley three times. That was something we could only dream about, when I was a kid …

Salut! Sunderland: how big a game is this for you? I’ve noticed a lot of excitement among Port Vale supporters on social media

Rob Fielding: it’s a welcome distraction from the league but it’s worth noting that the reaction of the Vale support tends to be extreme. For example, we’re either world beaters or the worst team on the planet. So, I’d take some of the social media comments with a large pinch of salt. Having said that, it will certainly be a novelty to see a packed away end and the TV cameras in attendance.

Tell us about your somewhat unusual chairman and owner Norman Smurthwaite. A quick read about him suggests he falls out with just about everyone so here’s a chance to reveal his cuddly side!

Let’s step back to the beginning. In 2012 Vale were in a right mess. The club was in administration and the preferred buyer had disappeared. A brief plug here – the events of that period are covered in my book No Ordinary Season (available from Amazon at this link) if anyone is interested. Anyhow, Norman was part of a consortium who took over. When they first arrived it was a breath of fresh air. The club was run professionally, was able to afford well-known players and was marketed correctly. As a result we got huge (for the Vale) crowds and sealed promotion. Quite a turnaround from the disarray at the start of the season.

There was then a dispute between the chairman Paul Wildes and Norman with Norman buying Wildes out. Since then it’s fair to say it’s been a rollercoaster ride. There was a falling out with manager Rob Page, the disastrous “Bruno Ribeiro” experiment which saw the club relegated and a load of what can politely be described as PR gaffes. 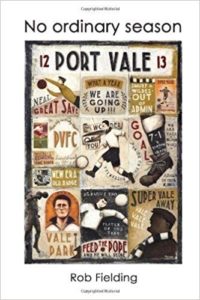 So, it’s fair to say the fans are divided on the merits of Norman Smurthwaite. He took over a club with no debt and we now have millions in director’s loans. But that said, unlike previous regimes, Norman does actually have the funds to bankroll the club if he so desired. I’d say there’s still a split in the fanbase – the majority want a change but Norman certainly does have some supporters.

Just above relegation zone last season, mid-table in League Two now. Is Neil Aspin the man to lead you to higher things?

Quite possibly. For me, there is a great deal to be said for continuity in football. If you look at Potteries football then all three local clubs have had sustained periods of success when the right manager was appointed and stuck with (that’s Tony Pulis at Stoke, John Rudge at Vale and Dario Gradi at Crewe for those interested). No manager is perfect but I think in general the good outweighs the bad with Neil Aspin. When you add in that the great Sir John Rudge is advising him (and was apparently instrumental in the club snapping up Mitch Clark from Villa) then I think it’s a combination worth sticking with.

And how high can Vale realistically aim?

That’s a tricky one. The financial gaps between divisions are such that it’s difficult to get anywhere without being bankrolled. I do actually agree with Norman Smurthwaite when he said that his wealth could take the Vale to the Championship but to take the next step would involve further investment. So, how far can they go? Nowadays it really depends on how much money the owner has.

You’re not named after a single geographic location but is there true community pride in Port Vale despite any local temptation to support bigger clubs?

Yes but it’s a struggle at the moment. Stoke’s recent success has certainly attracted the younger generation so Vale are suffering with an ageing fanbase.

What have been your own highs as a supporter?

My favourite match was in the FA Cup when Vale beat Terry Venables’s Spurs 2-1 in 1988. Until that point, I’d never had one of those “Wow!” moments and that was the first one. I vividly remember getting into my dad’s car after the game and hearing Port Vale as the lead item on Radio Two’s Sports Report. Then first match on Match of the Day.

To give it a little personal angle – apparently I was caught on camera at that game too. In those days BBC Grandstand had half-time reports live and the cameraman (probably bored) would pan around the crowd. According to my mum, she was phoned by a friend to tell her that her husband and son were on BBC One being filmed drinking a half-time coffee. Sadly in those pre-VHS/catch-up times I never got to see if it was true or not…

The two administrations. Even though you feel you are fighting for the right things when you take on a board that is doing harm, the fall-outs, the infighting and loss of friendships all hurt. Not only that but there’s the nagging doubt about what will happen to the club. I do think the actions of fans to oust the last board were a hundred percent justified but some of the wounds it caused have still not healed and that’s sad to see.

Who has given you the most pleasure in Vale’s colours?

A striker called Andy Jones. Jones was signed for £3,000 from Rhyl and proved to be a goal machine. In one season he scored 37 goals and scored nine times in two consecutive home games. He got picked for Wales and in front of thousands of Vale fans scored on his International debut. He was eventually sold for £300,000 to Charlton Athletic (a fair old profit on the £3,000 he cost). I had the pleasure of meeting Andy Jones a few years back and he was a delight. I am always worried about meeting your heroes but Andy proved to as nice a bloke off the pitch as he had proved to be a goal machine on it.

And who should have been allowed nowhere near Vale Park?

Does this have to be a player or can I tell you the tale of Peter Miller and Perry Deakin? Good. These “gentlemen” were brought onto the board – only it was discovered that they never paid for their shares – so they should never have been allowed to join.

Their appointments were simply not legitimate. But they were allowed to run fast and loose with club finances, including remortgaging the ground in secret. The club then fell into administration on their watch. As a result they were chased for their payment of the shares. It was tens of thousands of pounds which could have helped some of the other creditors, which included fans and local businesses but to date they have never paid for the shares that allowed them into the boardroom to wreak such havok.

We had enough trouble getting familiar with our own rebuilt squad. Who shines among yours?

Most fans only know of Tom Pope (feed him and he will score) so let me give you two other names.. Loanee Mitch Clark has been a revelation since joining from Aston Villa. He’s far better than League Two. The other sadly won’t be involved. Manny Oyeleke was a bargain signing from Aldershot and has proved to be a real midfield enforcer. But he’s recovering from injury and this game is possibly too soon to see him involved. Aspin has also brought in two influential old heads in goalie Scott Brown and centre-half Leon Legge who have both been big influences this campaign.

Did Sunderland’s sharp decline surprise you?

Not massively. I’d read stories on the owner, I’d seen some of the players were on astronomical wages and couldn’t be sold and weren’t performing and we’ve seen other big clubs (Blackburn Rovers, Manchester City some years earlier) fall through the trapdoor. No one’s too big to go down if the club is badly run.

Hand on heart where will our clubs finish this season in their respective divisions?

I think Vale will be mid-table. We need to give Neil Aspin another season to really push on and I see this one as consolidation. I’m no expert on League One but I suspect with the size of your club you’ve got to be in among the favourites to go up.

It could be tight as I live in Aylesbury and I have morning commitments but I’m going to try and be there. As for the score, this is Port Vale on national (well, kind of) TV so probably either a dire 0-0 or an awful 0-3 defeat… 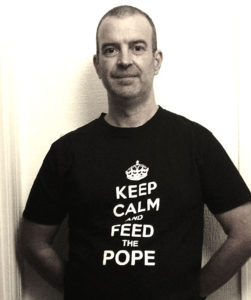 * Rob Fielding on himself: I have been a Vale fan since 1980 and have run the onevalefan.co.uk blog site since 1996. I’ve also written a book (I already mentioned it) called No Ordinary Season and I’ve also curated a free Port Vale nostalgia exhibition called Vale Vaults.

1 thought on “‘The novelty of a packed away end’: Port Vale vs SAFC Who are You?”