This should really have preceded Malcolm Dawson’s short, timely piece on the Luis Suarez biting incident. Monsieur Salut had assorted domestic crises, a heavy extractor fan falling in the middle of the night to smash the hob and my Mac’s refusal to accept the valid password for wifi access being only two of them. So here, out of sequence but welcome, are Jeremy Robson‘s thoughts on footballer’s teeth invading footballer’s flesh …

It would be nice to think that in days of yore, footballers took some responsibility for their own actions.

Perhaps they once did, and it isn’t simply a fogging of the nostalgic rose-tinted spectacles that I’m wearing. It would also be nice to think, that team mates and fellow professionals would demonstrate a collective contempt and show some solidarity in condemning the errant behaviour of one of their own. It was once the role of the captain (as well as the coach) to take the scoundrel to one side and tell him that he was out of order when a team mate misbehaved, and to get back in line pretty damned quick.

None of this is evident in the wake of what nobody has yet called “Suarezgate”.

OK I was the first to do so, and why not given divided response to the strong punishment now meted out by Fifa (nine-match international ban, four-month total football ban etc). It’s done now.

But nothing could be further from the minds of the Uruguayan squad in defence of their increasingly beleaguered striker after sinking his teeth into an opponent for the third time.

Diego Lugano, the captain refused to answer questions from a British journalist yesterday, preferring to take and answer questions in Spanish only, despite a capable command of the English language after spending some time at West Brom, where he had been paid good money for doing very little.

Lugano claimed that he had no idea why Fifa were investigating Suarez and, prior to the press conference and in the immediate aftermath of the Chiellini incident, he said “anyone who believed that the mark on Chiellini’s shoulder was the result of Suarez biting him must be stupid”.

We can only assume that Lugano has the same view on the incidents involving Suarez and Otman Bakkal and Branoslav Ivanovic. We’ll see who’s looking stupid now that Fifa’s disciplinary committee has made its decision on the matter.

Lugano’s defence of his famous friend is if anything even more offensive than Suarez’s intitial actions.

At the time Chiellini started grabbing the shoulder of his shirt to reveal the template of the Uruguayan’s teeth, you would hardly thought this possible. He even referred to Chiellini, the victim of his assault, as “a coward” and claimed that “the pictures don’t show anything”. Lugano followed this with “I know that the British media persecute Suarez. That is known.”

Is the real truth not that the Uruguayan camp is determined to blame anyone and everyone involved with Italy and England for an incident they describe as either “nothing” or “unimportant”? Self-interest, money and opportunity are the enemies of truth an integrity it seems.

The Uruguayan coach was determined to defend Suarez at the end of the Italy game, proclaiming “this is a football World Cup – it’s not about morality, cheap morality”.

They may find that morality isn’t cheap after all, but their defence of the indefensible and determination to lay blame elsewhere is priceless. 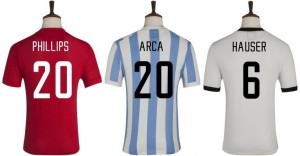 * While we’re on, here’s a Sunderland-related offer from our friends at Camporetro.com … but be quick: the deadline is tonight (Thursday) at midnight.

Forget overpriced official replicas and pick up a timeless classic. Add any legend printing and get £10 OFF. Enter SS£10 at the checkout before midnight Thursday http://bit.ly/1pjaVA2

Love retro? You’ll love these classic World Cup shirts by Campo Retro.
Phillips, Arca, Hauser (I think Campo Retro said Hauser – Ed) ….. we all have our favourite international stars that we love. Get them added to a Campo World Cup shirt and save £10 when you use SS£10 at the checkout.