It was a great feeling to be in the automatic promotion spots, short-lived as it proved to be.

Second top for a couple of weeks during the layoff caused by one of those outbreaks of much less interesting football – internationals – would have been rather nice. Birmingham’s late equaliser at West Brom put paid to that.

Realistically, with Brum starting yesterday with two games in hand and level on points, we should be grateful that they dropped two.

Judged on mathematical terms, and given how few games remain, we are still outsiders for a top two finish and probably haven’t played as well as we can in either of the past two home games. But we are in a great position to benefit from any slips by Birmingham or Derby.

And look more broadly at this season’s positives, above all by reflecting on where we were before Roy Keane’s arrival.

Then look back a bit further and remember the sheer torture of being a Sunderland supporter last season and for the final two seasons of our last stay in the Premiership when all the promise of the barnstorming promotion in 1998/99 and those two seventh top seasons was turned to dust by mismanagement at every level.

Now we once again have a club to be proud of. 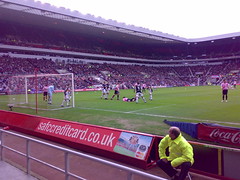 Attendances are gradually climbing – 38,000 plus for the visit of Hull City was a great encouragement and no less so because of the contribution made by the away support – and it is clear, even from my distance, that the team is playing good football under a young manager of enormous potential.

The true measure of the progress we have made is that we would be disappointed if we had to settle for the playoffs.

Ian Todd summed up the feelgood spirit that the Keane Revolution has created when he said recently, elsewhere, that he could not remember the last time he felt so upbeat about receiving his season ticket renewal package.

That is the kind of talk – from the kind of fan – that makes me feel equally enthusiastic.

As the founder of the London branch of the Supporters’ Association, and a season ticket holder since the 1960s (he punished the club for one year of McMenemy by refusing to renew), Ian has few equals in terms of commitment.

Pete Sixsmith and another SoL Pete, Horan, believe we will not lose again this season. That’s a tall order, but the 11 defeats earlier in the season make it difficult to see us grabbing a top two place otherwise.

If we do end up in one of the four trailing positions, our recent run would surely give us every confidence in facing any of the top six rivals.

Even Preston, having defeated us three times this season, would be more worried about us than the other way round.