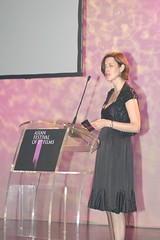 Thank you for the entries to Salut! Sunderland‘s competition marking its first 5,000 hits.

The question I set was this:

Imagine I am an acclaimed actress. Now read the clues and tell me who I am

2) I have won awards for my work and my roles have included a nurse, a woman in a wheelchair and a store detective

3) Whether – or how much – I support Sunderland is a bit of a mystery. But a fly on the wall would make you think I was passionate

The answer, of course, is Gina McKee: Peterlee lass, superb actress and the product of a resolutely SAFC-supporting household. She famously narrated the Premiers Passions series that took a fly-on-the-wall look inside the club during the Reid era (hence question 3) but firmly resisted all attempts by Wear Down South to tempt her into an interview.

Among the winning replies were a couple from non-Sunderland fans who strayed into the site. I thank them for doing so, and would have been perfectly happy to see either win.

But forgive me for being even happier that the winner is SAFC through and through.

Step forward Joe Simpson, soon to be the owner of Alice in Sunderland, a brilliant new book by Bryan Talbot.

Thus John became Joe – in honour of his very favourite player, Joe Bolton. This is how he explained his perhaps surprising choice when we spoke back in late 2001:

I know you need flair players. But fans take to heart those who have that do-or-die approach that epitomises the Sunderland spirit.

On Saturday, I watched Nyron Nosworthy give a Joe Bolton sort of performance as an absolute rock at the heart of the defence, making him – for me – our man of the match.

If Salut! Sunderland‘s prize winner is the sort to move with the times, maybe he’ll soon be instructing Equity to list him anew. As Nyron Simpson.

1 thought on “Wayne’s dad a winner”