By Pete Sixsmith in Dublin

So, the season almost begins and here we are on a pre season tour.

The last time I followed Sunderland abroad was an absolutely disastrous pre season to Spain.

Disastrous on a personal level because my father had just died and my travelling companion’s daughter’s father-in-law was just about to. And disastrous from a playing point of view because we realised in the delightful city of Seville that we were prime candidates for relegation.

Well, this time in Dublin there are no personal sadnessess and despite a lack-lustre performance on Saturday no real fears of relegation.

But it would not be fair to say that all in the garden is rosy. 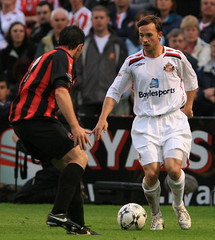 Dalymount Park is the biggest football ground in the Republic. It used to stage internationals and the likes of Charlie Hurley and Ambrose Fogarty would have played here at one time.

Roy turned out a strong side against Bohemians and I am sure he expected a comfortable win. Bohs worked hard, considering that they had played a league game 24 hours earlier and with us playing probably at only 50 per cent capacity, we never really imposed ourselves until the second half when the hosts tired and Stern John managed to do what Chopra and Co had failed to, that is hit the net.

Paul McShane confirmed that he is the ultimate Micky Horswill lookalike with a very sound performance and there were glimpses of skill from Kieran Richardson. Not a great win, but it may start the momentum leading up to Spurs.

Unfortunately, Dublin is yet another example of how pond life is attracted to football and specifically Sunderland. There was a very unpleasant altercation between two fans involving extremely foul language and the serious threat of violence.

The Garda stepped in quickly and evicted the violent one, allowing the foul mouthed one to remain. There was the usual amount of foul chants directed against Shearer – this is now so boring; can’t we give it up?What next, a ditty about how Hughie Gallacher smoked too many Senior Service?

Contrast this with the atmosphere at Croke Park where we went on the afternoon to watch the Hurling. Some 42,000 people there, rival supporters sitting next to each other and talking and two cracking games. No beer monsters, no BNP supporters and no attitudes tnat would shame Neanderthal Man. We could learn a lot from the Irish…………

2 thoughts on “On tour with SAFC: Hurley, hurling and a pair of hoolies”