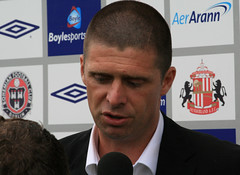 We all whinge from time to time about the club we support and the people who run it.

Sometimes they get things wrong, and those who feel themselves on the wrong end of a spot of pettiness shout loudly enough about it.

But at other times they get things so right that it would be a shame not to say so with as much vigour.

On Tuesday morning, a letter dropped on the doormat of the Scrivens household in Cirencester. It was a sad day – the funeral of Arthur John Scrivens, better know to friends and relations as Rasher, a lifelong supporter of Sunderland AFC – but the letter made it a little more bearable.

The letter was from Niall Quinn who, hearing of Salut! Sunderland‘s mention of Rasher’s passing at the age of 81 in the context of Ian Porterfield’s death, had sent some touching words of condolence to his widow, Nancy.

Rasher’s granddaughter, Amy Standley, who had first contacted me to verify that Wise Men Say would be a good choice for the service, reports her gran’s reaction:

She was so pleased……and was telling everyone about her letter from Niall Quinn!! The letter arrived on Tuesday morning, ahead of the funeral – so it was perfectly timed.

Thanks Niall for doing the decent thing, and thanks Louise Wanless, who heads the SAFC media relations team, for organising it. Small gestures can mean a lot.

1 thought on “Getting it right”