Joan Dawson wrote these beautiful words about what she had witnessed at the arena*** where, on Saturday afternoon, I really wanted to be:

A good performance, a great home debut by Kenwyne Jones and an important win. But the day will stick in my mind for the tributes to Ian Porterfield.

The club got it exactly right. The Z-cars theme, the ’73 players coming out with the cup, the commentary from the game, then a great cheer from the crowd followed by prolonged and heartfelt applause.

All the memories and feelings of that time came back. Then, coming up to the 80th minute, the South West corner started chanting Stand up for Ian Porterfield.

As the chant grew the south stand stood up, the corners, the East stand, right around the ground, everyone applauding. I’ve never experienced anything like it at a match. 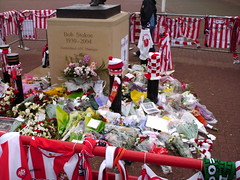 **Salut! Sunderland thanks “Krisread”, who permits reproduction of his**** Flickr photographs provided he is alerted to their use. This I have done. 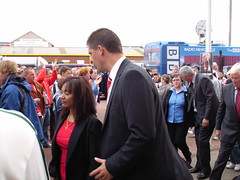 *** I was nowhere near the Stadium of Light. At about the time Ross Wallace was celebrating grabbing our second goal by ripping off his shirt and getting booked, poor Espartoso was making some defiant last charges before succumbing to the sword of a young Spanish torero Miguel Angel Pereta in the ancient bullring of Nimes in southern France. It cheered me no end to know that while the bulls were losing heavily, we had more or less made the game ours. For those interested, my impressions of events in Nimes – and what I think of bullfighting – appear at my main site Salut!