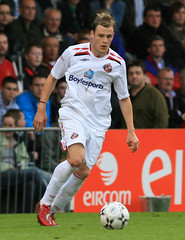 At least Anthony Stokes has a sense of humour, with wise cracks about celebrating his long overdue Premiership scoring debut with “a quiet night in”. More of the same – goals, not jokes – and Pete Sixsmith will forgive him all his Glass Spider excesses

Fair play to you, Stokesey

For the last few years I have worn a white shirt and SAFC tie to work after a win. Two years age, the shirt gathered cobwebs in my “wardrobe” while last year the collar and cuffs were frayed as it was worn nearly every Monday from January to April.

So, being the Bertie Wooster of South West Durham I popped along to my tailor (George at Asda) and purchased a new one after the Reading game. Since when it has remained redundant on the clothes rack despite my desperate desire to wear a £6.99 cotton shirt lovingly hand stitched by smiling urchins in Bangladesh.

Today, the shirt is being proudly worn along with the red and white crested tie and SAFC wristwatch as I bask in the glory of our third victory this season.

Craig Stanworth, a 16-year-old Leeds fan working through his Maths book, has given me a look which indicates that you don’t get much sadder than this. But who cares? We won a game and our manager made some brave and sensible decisions.

Dropping Gordon could have backfired but it didn’t. Bringing in Halford, ditto. Throwing on Stokes, ditto, ditto. The changes worked and we were able to collect three priceless points in a game that had Championship written all over it.

At least one of these two will be heading back there come May and it could still be both.

Derby offered bags of effort but you could see where their problems were. Little up front – although Miller and Howard worked hard – and a defence that coped with our forwards but lacked any pace.

Their midfield was stronger than ours, particularly through the middle where Whitehead had a shocker, but they looked like we did two years ago – doomed, and desperate to get back to the cosy environs of Oakwell, Turf Moor and Loftus Road.

Keane earned his money on Saturday and perhaps the arrival of Ricky Sbragia enabled someone to have a fresh look at the players. There are still problems at the back and Higginbotham made his now obligatory howling error, but Greg Halford looked much better and went forward with confidence.

Edwards and Whitehead are still short of match fitness and Carlos took a worrying knock. The arrival of Stokes proved to be a master stroke, despite the 45-yard attempt that was greeted with howls of derision.

We sometimes forget that he is not yet 20. When I was his age I was spending my nights drinking in the Albion pub near Park Lane bus station and trying to rake up the 50p cover charge needed to get into Annabels or the night club in Fawcett Street with a name that escapes me.

He earns more than my student grant in 1971 but young men do what young men do. He has potential and I thought he took the goal well, showing the savvy to follow up Kenwyne’s header. He got a name check from the sublime Christy Moore at the Sage last week, so he must have good taste. Do they play Christy at the Glass Spider?

I fear the white shirt may be back on the rack next Monday, but I will wash it just in case Chelsea have a mega off day.