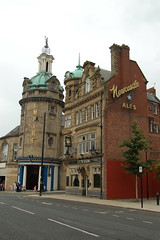 Where our defence gets panto practice?
Picture: dsch

One moment of pathetic defending at the start, another at the end and glaring misses as we got agonisingly close to an equaliser. Business back to normal after our latest one-win-in-a-row sequence.

McShane’s naive and clumsy attempt at a clearance after less than two minutes, aided and abetted by colleagues unable to get the ball upfield or up into the stand, gave Spurs a dream start. When Murphy was presented with as good an opportunity in similar circumstances, his feeble response must have left most Sunderland fans resigned to the likelihood that this, yet again, would not be our away day.

Yet we went on to have further chances as we dominated the second half. Chopra’s spectacular miss – ball, not target – would have been comical had he still been playing for Newcastle, while Miller and Whitehead and probably others also missed when scoring would have been easier, in one or two cases even for me.

Pressing forward as relentlessly – and necessarily – as we did, we were inevitably vulnerable to breakaways. But Robbie Keane can scarcely have believed his luck. It wasn’t even a breakaway but a routine goalkeeper’s punt from his area to ours.

Nosworthy and Evans somehow missed the bounce and let him slip through, and a £9 million keeper marred a fine match with goalkeeping more in the £100,000 region. The ball was hit hard but straight; it still managed to squeeze beneath Craig Gordon’s diving body and Keane had his 100th Spurs goal to script.

We were not robbed. Without Gordon’s first half saves, we would have been buried long before the interval. The game was so close to being over that it was lost when the second went in. There were no refereeing howlers of the sort that have cost us dearly this season. In fact the man in the middle, Lee Mason, had a very good game, even-handed with the 50-50 decisions and right on the bookings (two apiece).

And Spurs might easily have been four up at half time after our lamentable defending handed them a variety of ways of killing the contest stone dead. Is our offside trap a candidate for next Christmas’s pantomime at the Sunderland Empire? Oh yes it is.

And oh yes we’re back in deep trouble without, so far, more than a sniff of incoming Premiership talent. That’s PREMIERSHIP talent, lads. Not more Championship players. And not, or not only, a promising youth from a weak side (PSG) in a weak (French) league.

* Jim Duggan, the Spurs fan, brains behind the Topspurs site and inspiration for our Who Are You contributions from White Hart Lane, writes of the game:
Funny old game at Spurs yesterday, Spurs should have had it wrapped up long before half time despite not playing that well and with a few reserves with an eye to the league cup semi but then again as soon as you lot had chopra on, the balance of the game turned and noone could have begrudged you lot a draw.
Your fans were also a credit, a lot of them and pretty vocal which makes a change
Here’s to a go

od end of the season laughing at those awful Magpies falling flat on their faces amongst other things.