These Rovers have no cause to be mildly cross, let alone Wild. Their seasonal good fortune, the last dollop of it our expense, leaves us with a mountain to climb: somehow clawing three wins out of the next three home games. So says Pete Sixsmith

Blackburn Rovers must have had a deal with Old Saint Nick because they got a lot of presents this year.

A nice one at Manchester City with an offside goal and then six beauties courtesy of two sides that may well be heading back precisely where they’ve just come from.

It is fairly evident that Derby are already on their way down and pose a serious threat to our 15 points of a couple of years ago. How disappointing, though, to lose another record after we worked so hard to break our own 19-point disaster of 2002-03, and especially as Reading passed our 105 Championship points a couple of years ago.

Sadly, there is a chance (a very, very good one) that we can have another crack at getting our Championship points title back in 2008-09. That must have been evident to the 4,000 loyal fans who travelled across the Pennines to back the Lads at a cold and quiet Ewood Park. 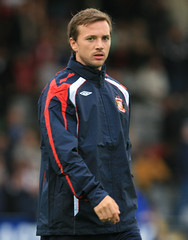 David Connolly: would he have missed?
Picture: Peadar O’Sullivan

Once again we dominated the opening 45 minutes only to troop off at half time with nothing to show for it. Unfortunately, our sole penetrative attacker limped rather than trooped off at the midway point and without Kenwyne we have little to offer up front.

David Connolly might have been an option on the bench but he has disappeared from the scene as effectively as a Hartlepool canoeist. Had he been there and on for the second half, the penalty issue might have had a more satisfactory outcome.

I use the word issue because that’s what the two were.

Samba nudged Murphy and it probably was a correct decision. It certainly wasn’t Rob Styles’s fault that Dean Whitehead’s feeble kick showed as much conviction as Pete Doherty promising to give up the drugs.

Five minutes later, the ball and Higginbotham’s hand were momentarily joined together and that wasn’t a correct decision. McCarthy gave a master class in penalty taking and we knew the chances of getting anything were remote. They disappeared altogether into the brooding Pennine hills when Yorke got himself sent off for the heinous crime of being too slow. Sydney beckons for Dwight.

The wretched Styles fell into the old trap of “evening up decisions”. I could name a dozen Sunday morning refs who were guilty of this and they were all crap. So, where does that put Styles? He had an obstructed view of a penalty box melee and decided to give a penalty because the Blackburn players ran about waving their hands in the air as if they were throwing a Spice Girls reunion show. Not good enough and the FA need to be told about refs like him who strut and see themselves as the centre of attention.

I know it’s beginning to sound paranoid but I am desperately looking for other people to blame rather than Roy Keane because I even more desperately want him to succeed. But questions are being asked by fans. Where are Halford and Stokes? Why are experienced players like Connolly and Kavanagh being ignored? Why do we put inexperienced and untried players like O’Donovan and Waghorn on the bench at their expense?

These are worrying times and I am not optimistic. The window is a good time to blow £10m on players that other clubs no longer want (Savage and Lita) or who are performing at a lower level.

The next three home games are crucial – we need the maximum nine points from them.