Think 3-0 at home to Wigan was bad? Pete Sixsmith has seen worse. But it was enough to dampen his hopes of nine points from the next three Premiership homes games against Portsmouth, Birmingham and – er – Wigan. And if his shopping list (a seven point haul) proves beyond us, we’ll just have to be grateful that the South Stand at Bloomfield Road was demolished soon after this photo was taken

Contrary to popular opinion, this was not our worst home FA Cup display in living memory.

There was an absolute shocker in 1971 when the mighty Orient (as they then were) came to a cold and empty Roker Park on a Monday night and also beat us 3-0.

That game was remarkable for two things: the selection and performance of Gordon Harris, an ageing former England midfielder, at centre half where he was embarrassed by a pacy and pugnacious forward called Mark Lazarus. My memory suggests that Lazarus scored twice and Harris ended up on a free to Worksop Town at the end of the season.

Alan Brown was manager that night and was on his way down the slippery slope from the status of revered figure who had taken us to the promised land in his first spell to the dinosaur out of touch with modern football. Roy is now taking his first look at that slippery slope. 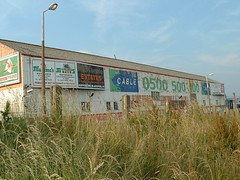 There’s a little bit of The Bomber in Roy Keane through his connection with Brian Clough.

Ol’ Big ‘Ead always spoke in hushed tones of his mentor at Roker Park and you feel that some of it has rubbed off on Keane.

Although I can’t imagine Brown dealing with the press as candidly as Roy did on Saturday night – “I was embarrassed and ashamed” – so was I, Roy – I can imagine Brown coming into his office and drawing up a list of players who are not good enough for the lengthy relegation campaign in which we are now well and truly embedded.

One of Brown’s habits was to allow players to drop off the radar without any explanation to the fans or the media – Calvin Palmer and Ian Porterfield spring to mind – and also to rely on young and untried players in the midst of relegation battles. Brian Heslop and Mick McGiven were two in 1970 who tried hard but ultimately helped us to go down.

Is Keane doing the same? For the names above read Halford and Stokes, McShane and Waghorn.

Saturday was the worst day I have spent at the Stadium in a long time. We were beaten by a side who were missing as many regulars as we were (not that our constantly changing selection policy allows for there to be many regulars in the first place). The difference was that their replacements showed a modicum of skill and thought.

We have serious difficulties at the back and I am no longer surprised by the awful howlers that we perpetrate on a weekly basis.

All three goals would have been prevented by a reasonable Northern League side. No marking and no talking for the first, a pathetic attempt at a clearance by McShane for the second and a good impersonation of Gary Breen backing off for the third. McShane must be due a rest and Nyron looked the player he was when he was in service as a full back two years ago.

It calls out for someone who can tell players what to do. I felt that Schaners goal was the worst one we have conceded all season because of this: no marking and nobody taking any responsibility in the box.

Gordon looks like a man regretting his move, although Hearts are in as big a mess as we are. He is not a dominant keeper and John Penman hit it on the head when he said that he was used to having a big figure like Stephen Pressley in front of him. At the moment it’s more like four Elvis Presley impersonators protecting him.

So, let’s see what the window brings. Fortunately Savage looks like he’s on his way to Derby so that means we probably won’t have to bite our tongues at matches. My mate Pete Horan said that signing Savage would be his worst ever day as a Sunderland supporter – that’s some statement from a man who has been a Sunderland supporter for even longer than I have. What about Bobo Balde? Is Matthew Taylor coming? Can we get Alves from Heerenven?

The Bomber never had to cope with a 24/7 media or a transfer window. Roy has known nothing else. We need the strength and commitment that Brown had in the early 60’s if we are to survive. A minimum of seven points from the next three home games or else it’s Bloomfield Road here we come – and not on Billy Reilly’s bus.

1 thought on “Soapbox: our cup runneth under”

Next Post
Roy Keane and the great transfers debate (6)