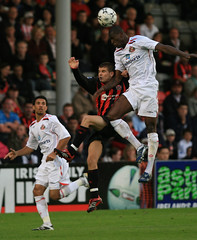 The first emotion is one of overwhelming relief. As the week wore on, the fear was that we’d be hard pressed to put out a team at all; to claw three massive points out of that unpromising scenario represents a mighty achievement.

And the second emotion? Genuine pleasure that – not for the first time this season – our most consistently criticised players pulled enough out of the hat when it mattered to secure the win.

All week, the view among fans subscribing to the Blackcats forum seemed to be one of deep gloom at the prospect of Etuhu’s return from the African Cup of Nations. And who should pop up with a powerful headed finish to Whitehead’s superb cross to give us a nervy half team lead?

Who then kept us in the game with world class saves (OK, if we overlook one fumble that nearly cost us dearly)? Craig Gordon.

But the moment I loved best was perhaps restricted to those of us viewing the game live but thousands of miles from the Stadium of Light.

On came Andy Reid, whose signing also attracted a fair amount of stick as our less than impressive part in the transfer window ran its stuttering course.

“Isn’t he carrying a bit of timber?” the commentator remarked. “Always has done,” came his colleague’s response. And with that Reid conjured the most brilliant crossfield pass to set up Murphy – yep, that Murphy, who Blackcats couldn’t wait to get rid of a few weeks ago – for his glorious strike.

Others who have borne the brunt of our fans’ frustration and despair did their bits, too. Collins and, one or two of his “moments” apart, Nosworthy had good defensive games, holding out with Evans and Bardsley against muscular handfuls in the Wigan attack. Whitehead was back to much better form in midfield, and made that cracking goalline clearance. And the goals from midfield took pressure off Kenwyne Jones, hardworking and occasionally effective but generally subdued.

But think back to other vital wins. Murphy and another much-questioned signing, Prica, against Birmingham. Stokes with his last-gasp winner at home to Derby………Richardson (and Murphy again) against Bolton. Richardson single-handed in the Portsmouth game.

The explanation is simple. Kenwyne apart, every one of our players has had to take flak this season as we have struggled to pick up points. It has something to do with them, but even more to do with the great millstone that perches itself on every Sunderland fan’s shoulder. Young or old, we have all endured that messy combination of ecstasy and misery, bright hope and bitter disappointment.

Yesterday, bad as the game was, brought renewed hope. A few slices of Premiership class, and a generous dollop of luck, had seen us through, leaving us this morning at the heady heights of 14th top.

I’d be delighted but surprised if we finished the season that high. But survival, as I write, looks a lot less implausible than it has done after practically every away game.

And while Roy Keane has not got a squad capable of aiming much higher than safety, he has assembled a team of battlers who may sometimes seem frightened of the fans and panicked into committing costly howlers, but are surely 10 times more afraid of leaving the field to explain to Keano why they gave a fraction less than 100 per cent.

Next Post
Soapbox: Premier League, you’re having a laugh