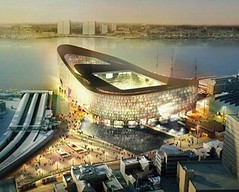 Not quite ready in time for Saturday
Picture: twmiller@btinternet.com

Smug feelings about our 2-0 win over Portsmouth were still strong when Salut! Sunderland went in search of a Pompey fan to write about Saturday’s return fixture. The choices were plentiful: Peter Allen, friend and fellow journalist in Paris; Robert Hardman, another former colleague; Brian Oliver, esteemed sports editor of the UK’s best national newspaper, The Observer. But the search ended neither in Paris nor London, nor on the Hampshire coast, but – thanks to the fans’ site pompeyonline – roughly the same distance from our ground as was travelled by Carlos Edwards’s winner against Burnley. Let Equinox introduce himself and tell his own story……

I am one of just four known Pompey fans in the North-east of England. Born and raised in Portsmouth – oh and by the way, the pronunciation is ‘Portsmth’ not ‘portsMOUTH’ but to be on the safe side call it Pompey and you’ll make friends – I have lived and worked in the North East since 1989, including a spell prosecuting at Sunderland Magistrates’ Court (as good a reason as any to use an alias!).

And why “Equinox”? Well, the equinox is the highest point the Sun reaches in its annual travels, and at the time I joined the fans’ forums on the net I was the farthest north Pompey fan we had; I was the equinox!

Think of Pompey and you’ll probably have an image of a soft southern city full of beautiful buildings, art galleries, wine bars………….

Er, no. It’s more like Pallion on a wet Tuesday in parts. Geographically, Pompey is in the south but it’s a gritty working class city with no more pretension to beauty than Sunderland.

And therein lies a link, we seem to think alike about our teams. Go to Pompey and sadly nowadays you will see a few ManU and Liverpool shirts, but predominantly it is blue, a nice dark blue, Olympian blue as it is called by Canterbury our shirt suppliers.

We are as passionate about our mob as you are about yours. We can respect supporters who stick with their sides through thick and thin because we’ve been there. So have you. After over 40 years in the wilderness, we are now enjoying our time in the sun but we’re armed with the knowledge that one day we’ll be back to playing Rochdale on a cold Saturday in February.

Wearing red and white stripes in Pompey is a bit of a no-no. Choose your away strip if you wear colours; there is unlikely to be any trouble, although as in any city there are nutters about and candy stripes tend to set them off a bit.

Fratton Park is a throwback. It is a medieval ground that harks back to the times of terraces, flat caps, Woodbines and Watneys Ale. If you miss Roker Park and hanker after the proper atmosphere, then Fratton is for you. If you like prawns, stay away. Away supporters now have a roof over the Milton End. It has only taken us since 1898 to build that so you ought to feel privileged.

I am proud of my team. I am proud of my city. I am honoured to have made a home here though, and to have been made welcome by the fantastic people in the North East. I sincerely hope that you enjoy your day out on the south coast and can experience some of the sights, sounds and atmospheres that make Portsmouth a special place. Of course I hope you come home like Jan Tegan did from the Eurovision Song Contest – with nul points.

And now for Salut! Sunderland‘s questions:

What did you think of our respective clubs’ prospects before season started?

Europe for us, hopefully survival for you. There is a lot of goodwill towards Sunderland, especially as I have a pagan-like theory that the Premiership will only have one team wearing red and white stripes (oh how we HATE that strip) at any one time. Sunderland staying up means that hated neighbours stay down


When did you last see a SAFC v Pompey game home or away, and what happened?

Oh look, I was at the SoL in January and we were awful. Truly, truly bad. You know the score, I don’t need to go on about it and prefer to remember Matty Taylor’s wonder goal two years ago

Have you been to SoL (obviously the last question may answer that). if so what did you make of it? Of Sunderland itself? Or if not, had you ever been to Roker Park? Same follow up questions

SoL – yes, stop reminding me will you? And Roker Park, are you torturing me? ’92 was it? We needed to beat you to secure promotion to top flight and you needed to win to stave off relegation. I was in the Clock Stand with some stripey friends and we went down 4-1. The skunks went up with West Ham taking the second spot on goal difference thanks to you lot and you survived. Forgive me but I was gutted

What about the signings each club has made in the transfer window?

I can only speak for Pompey as I haven’t a clue who you have signed – your best signing of the past few years has been Roy Keane. What a revelation than man has been as a manager. For us, phew, Diarra is simply world class – he really is the dog’s private bits, Defoe gives us a bite that we have lacked for two years. We were all very sorry to see Benjani go – Banjo was the hardest worker on the Park and will be missed. And of course our Africans returning will be like four new signings, well three new and old man Kanu who is reputed to be 86 years old.

Your predictions for both clubs for rest of season?

We have now played the top four home and away. None of them have beaten us at Fratton………. We still have some difficult games but top six and the FA Cup semis has to be an aim. For you, I want you to not only survive, but to smile as you finish top of the North-east mini-league. And after their bad grace at our mauling of them in December, I want the skunks to get relegated

Do you regard Southampton (editor’s note: I could swear that is what I wrote, but it somehow came back as scummers) much as we regard Newcastle? Or are you more grown-up about such things?

Who? There are three teams in Hampshire. Pompey, Havant and Waterlooville [the Hawks] and Aldershot. I think there is a pub team about 17 miles away but their fathers sleep with horses. Our enmity to them demonstrably goes back to the 17th century and it won’t end now.

Memories of players linked to both clubs?

Paul Hardyman and Kev Ball spring to mind, dear old Kev went native and actually said he preferred you over us – mind he was your caretaker manager at the time and we merely laughed politely as we scored a last minute penalty!

Club vs country. Who wins for you?

Who will win on Saturday? Score? And how will you follow the game from your great distance?

I won’t be at the game as I can’t afford it unfortunately. I need to go to London the following Tuesday and that has taken all of my cash. Pompey to win. 2-0 I reckon. We need to avenge that awful performance at the SoL and being at Fratton Park is a world away from the fancy Premiership ground that you have……. I don’t think the Milton end bogs have been cleaned since 1945 actually……………

* Equinox on Equinox: Born at St Mary’s hospital in Pompey – now that is relevant as you can see the ground from there, although I don’t think my mother was that interested at the time. Saw my first games in the 70’s, think the first one was against Hull. We lost an awful lot back in those days and were woeful but that first one was a riveting goalless draw. But the atmosphere ! Nothing better. Moved to the north east in 1981 to study law at Newcastle, met this gorgeous blonde and came back here in 1989 as a missionary to teach you lot to speak properly. Some hope. Still with the blonde though and have two sons. What I do for a living (editor’s note: for those who haven’t guessed) is irrelevant, and anyone who knows me will be able to work out who I am from this lot. Equinox is also my username pompeyonline.com, our web supporters’ group – well one of them. Drop in for a chat. Respectful away fans are welcome.

2 thoughts on “Who are you? We’re Pompey”

Next Post
Soapbox: another Saturday away from the Stadium of Light