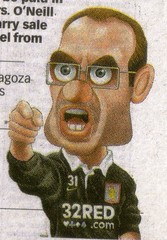 UPDATE: Jan 12…if 1) there is the slightest truth in speculation that we are about to sell Kenwyne to Villa and 2) no replacement is lined up and 3) we go down for lack of firepower, someone needs to be handed a revolver and bottle of whisky and led to the solitude of a darkened room

When, on behalf of 5573, the magazine of the London branch of the SAFC Supporters’ Association, I wrote to Martin O’Neill to request an interview, the silence was deafening.

He was then manager of Celtic. Our interest naturally arose from his oft-stated boyhood support of Sunderland. Our letters, addressed to him and to the press officer of the club by name, were polite and respectful. They couldn’t be bothered to reply (and cannot even claim non-arrival, since at least one reminder was sent).

Let SAFC’s response to O’Neill be similar if the tabloids are correct in saying he’s planning a bid for Kenwyne Jones. Not just any bid, but one for £5m – isn’t that £1m less than we paid for him?

Niall. If you are listening, do not send a firm No to Villa Park. Do not engage O’Neill in conversation. Just ignore him and, like 5573, he’ll eventually go away.

Oh, and let it be Blyth in the next round. That would be fun, and there are surely just so many times you want to play Blackburn in a season.

4 thoughts on “Kenwyne: don’t even tell Martin O’Neill where to go, Niall”