The Man City game was my last before leaving the home of City’s benefactors, Abu Dhabi, to return to Europe. I had hoped for a special performance to mark my final day, while here, of Sunderland football. It came, but not from the Lads…

That feels more like it. No more effete, elitist notions of 11th or 12th top safety. All thoughts of “moving up to the next level” put on hold. Another game + another display of kamikaze defending + another punchless quest for goals = another defeat = another desperate relegation scrap …

There’ll be plenty from Pete Sixsmith on all that. So let’s get in first by congratulating Sunderland Ladies – pictured above, courtesy of Sunderland WFC – on what The Guardian elected to call “the surprise of the season”: reaching the women’s FA Cup final with a 3-0 win over Chelsea at the Stadium of Light.

This line from the official site of the women’s team says it all:
Sun 22 Mar Chelsea H FA Cup Stadium of Light 2.00pm 3-0 Gutteridge; Williams (2)

As the father of an excellent footballing daughter, Nathalie, I feel well qualified to pay tribute to the Sunderland lasses’ achievement.

At Pride Park, Derby on May 4, Mick Mulhern’s team will go for even greater glory when they face Arsenal, for whom Nathalie (pictured above in training) once had trials, including 20 minutes as a substitute in a pre-season friendly against Swindon.

Mick accepts that Arsenal will be massive favourites, but says: “It will be a win-win situation for us because no one will expect us to get anything out of the game.

“After beating Chelsea as well as we did, though – and it was fantastic to do it at the Stadium of Light – we’ll go into the game with confidence and we’ll have a right good go at them.”

Salut! Sunderland says: Bravo girls – and not just Sophie Williams, for her two goals, and Natalie Gutteridge, who scored the other, but the whole team and staff; in the picture below, you see Lucy Bronze on the left, with Lucy Stainforth. Now let them get out there and disarm the Gunners.

When I first posted this item, at 8.25am in the UAE on Monday (albeit four hours ahead of Sunderland), there was no mention on the official SAFC website of the kind of news it should have been shouting from the SoL standtops the moment the final whistle went against Chelsea. The site was still showing only the preview until the middle of the morning, their time, when this perfunctory report – all of four skimpy paragraphs at the time of writing (Tuesday morning) – was published.

Salut! Sunderland is not in the habit of dishing out kneejerk criticism of the club but humbly suggests they might have done better. What is more, it bets the chairman would agree.

* Here’s another picture, this time adapted from Gary’s Photo Gallery of Stockport County Ladies FC (it is undated but was taken during an 8-1 Sunderland win! If anyone knows Gary, please tell him we’ve used one of his photos) 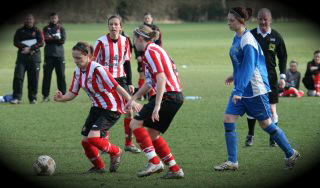 1 thought on “Let’s hear it for the lasses”