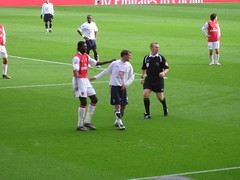 The Daily Mail put it like this: “Arsenal’s task might have become very much more comfortable in 34 minutes, when Sunderland’s captain Lorik Cana launched an appalling two-footed assault on Eboue and took a yellow card when it probably merited red.”

Maybe. But has one of the refereeing Grahams of Tring not got a short memory?

I do not recall him complaining when the match referee completely missed a GBH-style assault by Ben Thatcher, then of Wimbledon, on Nicky Summerbee. Summerbee was still on the ground, SuperKev standing over him with obvious concern, when Wimbledon charged upfield and scored. The ref gave the goal. He was called Graham Poll.

Nor did Mr Poll go on radio to belabour the ref who allowed a Man U winner at Sunderland, at a time when we were actually in a position to go top of the Premier, after Andy Cole blatantly handled in the build-up. Guess who the ref was again? In fairness, he did get one decision right in the immediate aftermath of the goal: sending off Mickey Gray for racing halfway across the field to register a foul-mouthed protest (neither Gray nor I could seriously complain about that).

None of it makes Poll a bad ref. Despite the way the international part of his career ended, following disgrace in the World Cup when he booked the same player three times, I thought him a good ref, if a touch arrogant.

Nor does Steve Bennett become a good ref in my eyes because he leaves the captain of my club on the field. Cana is a big-hearted, passionate player whose commitment – as a Gooner put it – impresses even opposing fans; he also has a reckless streak that he, with Steve Bruce’s stern encouragement, absolutely needs to curb.

What it does mean is that referees, by and large, make honest decisions, some of which are right and some wrong. They don’t have action replays, even if there is a mounting case for appointing someone, positioned in front of screens but off the pitch, to act on them after contentious incidents.

And remember this as you (with my probable accompaniment) shout abuse at whoever we get as the match ref at the SoL on Sunday: they don’t make anything like the number of result-affecting mistakes as the much better paid players running around them.