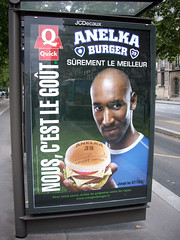 An 18-game international ban for Anelka, a five-match exclusion for Evra and taps on the wrist for Ribery and Toulalan. Have we heard the last of this French farce? Probably not; they can appeal …

Fair play to Patrice Evra, Jérémy Toulalan and Eric Abidal. Of the infamous five French World Cup rebels summoned to a disciplinary hearing in Paris today, they did at least deem the occasion worthy of their presence.

Nicolas Anelka was nowhere to be seen, and nor was Franck Ribery. In Ribery’s defence, his club Bayern Munich made it clear they did not wish him to turn up – a scandalous position to take – and he potentially, of course, has grander tribunals for which to prepare (and where his attendance would not be optional).

Why Anelka was not there I simply do not know. But I am delighted that since the French Football Federation apparently had no financial sanctions at its disposal, he was handed an impressive 18-match international ban. Maybe he’ll think twice before unleashing another foul-mouthed tirade in the direction of his manager, club or country, in future.

Evra got off with a five-match ban, Ribery three matches and Toulalan – who, believe it or not, instructed his agent to write Raymond Domenech’s humiliating statement to read to the media after the Mutiny of Knysna – a single game. Eric Abidal got away altogether with having refused to play in the final match, presumably having persuaded the disciplinary commission that he was not acting petulantly but in no fit state of mind to turn out.

I couldn’t care less whether, as the first French report I have seen suggests, the extent of the ban means the end of 31-year-old Anelka’s international career. For that matter, I don’t really suppose Anelka is much bothered either.

Like the rest, he will go on pocketing his obscene pay packet and quickly forget the shame he brought on his country and himself.

For the record, I believe only Anelka has received anything appropriate adequate punishment. As I have already said here and at When Saturday Comes, gigantic fines would have been more fitting and the money could have gone to kids in the banlieues.

As it is, it will take a long time for any of these arrogant m(b?)illionaires to redeem themselves and earn the respect once more of young football fans.