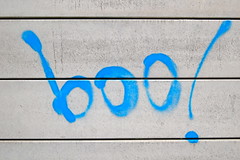 So who in football makes your hackles rise? Do the cheats, the poseurs or bonebreakers enrage you most – or is it a certain ref, manager, TV pundit or Fleet Street hack? I’ll start my own list here, but everyone is welcome to add to it, filling in the missing entries or second-guessing my choices. If the responses flow, I’ll keep bringing the item back to the top of the site (and insert your updates) …

Sorry, but comments from people who haven’t posted before are subject to a short delay for anti-spam moderation

A list of who to cheer would be shorter. I’d put Howard Webb on mine, for dealing as well as he did – give or take a couple of errors – with the uncharacteristically thuggish Dutch in the World Cup final. But then I know he’d just reward me with one of those point(s)-denying decisions of his against Sunderland. Aaron Ramsey will definitely get a Salut! Sunderland cheer, but first he must recover from that horrendous injury.

So let’s make it, for now, an A to Z of the players, management, officials or others to whom we should consider giving a torrid reception in the 2010-2011 Premier League season. I will set the ball rolling; your job is to fill in the gaps or improve on my selections.

One rule – others may evolve – is this: booing of players from your own club, however incompetent or lazy they seem, is banned. Unless they were in the French, Dutch or England squads in South Africa.

* A is for Anyone who played what Johan Cruyff magisterially called anti-football, for the Netherlands versus Spain. And for Nicolas Anelka (see B)

* B is for Les Bleus, namely any member of the awful, angry, arrogant French World Cup squad who earns his living in the Premier. Think Evra, Anelka, Malouda, Sagna, Clichy, Diaby. And Gallas if he returns to the Premier.

* C is for Cheats, the growing number of players of all nationalities who happily engage in all that diving, writhing about in apparent agony when not even hurt, shirtpulling, sneaky handling of the ball, badgering of refs to book or send off opponents and other nasty habits now taught as basic technique by Premier coaching staff.

And from George (see comments), C is also for corners – “all the pulling of arms, bear hugs and downright cheating at corners … it’s about time it was eradicated from our game but which referee would be strong enough?”

* D is for Nigel de Jong of Man City, for his passable impression of a clumsy martial arts practitioner disguised as footballer (see A). And Jermain Defoe for the reckless challenge that has given Craig Gordon so much grief

* E is for the England players who got games in South Africa: as overpaid and overrated a bunch of underachievers as you’re likely to encounter (Les Bleus excepted). Wasn’t our Darren well out of it?

* F Your shout. I’d have nominated Sir Alex Ferguson except that his achievements outweigh his pantomime boorishness

* G Your shout, though Gary Neville still deserves the odd jeer or two, if he plays against us, for his anti-Sunderland comments of the past

* H is for John Heitinga of Everton (see A)

* I is for Hérita Ilunga of West Ham, just so he doesn’t think we’ve forgotten his disgraceful play-acting in the Kenwyne Jones incident last season

* K is for Dirk Kuyt of Liverpool (see A)

* L Your shout, since there’d be no point in booing London match ticket prices

* M is for Arsenal’s Marouane Chamakh, who was probably innocent in the let’s-insult-Sunderland campaign of the Bordeaux chairman Jean-Louis Triaud and the then manager Laurent Blanc of a year ago but can accept the boos on their behalf

* N, I am afraid, is for Newcastle United who have had far too much grudging goodwill from here for Chris Hughton’s impressive managerial achievements and need to be put back in their places

* O is for any linesman who flags for offside against Darren Bent, especially when he’s onside

* R is for referees who think the ball crossing the line is just its way of remaining in open play, who miss keepers charging out of the area and handling the ball (Mr Webb at Villa a couple of seasons ago) and who generally make it even harder for Sunderland to win

* S is for Sky TV for mucking up long-distance match travel arrangements with scant notice. And for Salut! Sunderland if you wish.

* V is for Robin Van Persie of Arsenal (see A). Maybe merits especially loud booing because 1) he defended Holland’s roughneck gameplan and 2) Arsenal fans adopt such a high-minded attitude about ruffians at other clubs. And keep some boos for the first fan who blows a vuvuzela at a Premier match

* W is for whichever authorities in the West Midlands ordained that away fans should routinely be banned from licensed premises in Wolverhampton, even in the friendly, sunny, nothing-at-stake atmosphere of the last day of the season

* X is for players who commit X-rated, career-menacing tackles

* Y is for any attempted comeback by football yobs but also for club officials who decide there’s no need for the presumption of innocence, banning people before they’ve been convicted of anything

* Z is for the teams that set out to induce Zzzz…. or deep sleep with their boring, unadventurous tactics. Unless it’s Sunderland and we desperately need the point.