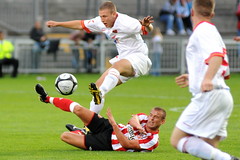 It was two days later when something else happened. I actually SAW the incident leading up to the 2nd yellow. I had a very different reaction.

You see, it’s very easy being a football supporter. It’s a wonderful outlet for the more basic parts of one’s character. You know that prejudice is a bad thing but – jeez you don’t think that applies to football supporting.

What I actually SAW was a Wigan breakaway with the Sunderland right back out of position and Lee Cattermole scrambling across to cover and standing between 0-0 and Wigan laying on the opener from the bye-line. He’d already been booked and it was down to him – AGAIN. Well LC is never one to hide during a game is he? He had a split second or two to decide what to do. In the Royal Navy there’s a saying “you can’t go far wrong if you place your ship in front of the enemy”. So I ask all you supporters: “What would YOU have done to benefit Sunderland AFC in that situation?” You’d have let the Wigan player go of course. Yeah, right.

The aftermath hasn’t been pretty. His boss has had a go at him. He’s been fined.

The problem you see is that Bruce has been unlucky. The correct timing for the Lee Cattermole last-chance saloon has unfortunately coincided with a situation in which LC is defendable.

But Bruce has instead opted for the last chance saloon anyway. I think this is a mistake because LC must be wondering where the line should be drawn. It’s like one-day cricket when you’ve lost some early wickets and you are miles behind in the scoring rate – “take some risks and score quickly but don’t get out”.

Given what Steve Bruce has done I have a few questions for him:

* What constitutes an acceptable yellow card that you take for the team? Are you going to detail this to Lee Cattermole?

* Do you consider this current 2nd yellow was defendable – and why, or why not?

* What were the comments in public and the fine designed to achieve?

* Are you going to give Lee Cattermole PRACTICAL ADVICE on where AND HOW to draw the line?

* What type of further mistake would cause Lee Cattermole’s exclusion from further first team selection? What wouldn’t?

Obviously our manager has to call it as he sees it. He’s an expert on football and that is what he’s paid for. I just feel that for this particular incident he has the human psychology wrong. I think he needed to play it down and deal with it internally at a purely helpfully professional level.

14 thoughts on “Prejudice and all that: coming to Lee Cattermole’s defence”

Next Post
Brushed-up images of Steed and Kieran, noble words from Bent