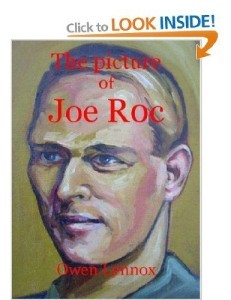 Owen Lennox, the highly respected Sunderland-born artist and author, was moved by the recent piece on Peter O’Toole’s Sunderland links to write about his own researches into Wearside history – and pass on an intriguing thought about the old war cry “Ha`way, Ha`way!” …

Reading at Salut!Sunderland that Peter O’Toole’s father was a Sunderland supporter sparked a reference to, O’Toole the bookie, I’d uncovered while researching a novel I had published in 2007.

Being born in Roker within earshot of the Roar, gives a truism to the adage “you don’t pick your team your team picks you”. My grandfather, Joe Quesnel, took me to my first Sunderland games in the unfunny season of 1957. He also took me to see the great painting by Thomas Marie Madawaska Hemy, of the Sunderland v Villa league game in 1895, it used to hang in the Museum and Art Gallery and now hangs in the main entrance at the Stadium of Light. Joe was a great story teller; he told me he was at the game when Hemy painted the picture, he said that Hemy was a very fast painter because he had it finished in the ninety minutes?

Joe Quesnel was born in France and came, on his own, to England at an early age, possibly 15. He ended up in Sunderland where, apart from a military service, he stayed the rest of his life. I decided to write a book about his, colourful, early life and called it The Picture of Joe Roc; Joe Roc was his gambling name. After I’d finished the book a reliable source in Sunderland told me that Joe Roc was a common pseudonym used by gamblers at that time. As I said earlier I did come across an “O’Toole, the Bookie”, during my research, but no reference as to the name Roc or Rock being used as a pseudonym by other gamblers of the period?

The Irish connection to Sunderland is well documented, it runs deep, and long may it continue. There is also a French connection, with the many French glass workers living in Sunderland in the early part of the twentieth century, and supporting the team, apparently the chant of, Ha`way Ha`way! Is a corruption of the French, Allez Allez!

As well as being an avid Sunderland supporter and gambler, Joe was a baker who as a younger man aspired to being an artist, hence his interest in the Hemy painting, he claimed to have met several well known painters of the early 1900s including Richard Walter Sickert and Sir William Orpen. Although The Picture of Joe Roc is a fiction it is based on writings (unpublished) by my aunt, Kathy Quesnel, who was an art teacher at Fulwell Girls` School. Joe left Sunderland for France during World War One, as a Seaforth Highlander, and saw action at Ypres, The Somme, Beaumont Hamel and Passchendaele.

I wrote the book because it was something I’d always wanted to do and I`d been advised to write about a topic I was familiar with and had an interest in. Joe had initiated my love of painting and my passion for Sunderland and its team is a passion that transcends winning or losing, it’s about belonging. Following my Baptism of disappointment in 1957 there followed the years of confirmed frustration. But belonging lends comfort; is there any other rational for keeping the faith?

The Thatcher years and my bike have exiled me in the Deep South, where I teach art in one of the best schools in the country. The branches may be spread wide but my roots were firmly planted. The Picture of Joe Roc was my small way of preaching the Gospel. When the book was reviewed by the Essex Chronicle the then editor, Suzanne Kuyser referred to it as “A love letter to Sunderland”.

Sunderland and the club have their history and traditions; each game is greeted with a realistic optimism, unlike the delusion of Magpies who think they’ll win every game 6-0.

Let the boastful Maglanders crow their credentials and the theatre of dreamers reflect in the glory that only money can buy. The masterpiece by Hemy that is the oldest painting of an association football match anywhere in the world is priceless and it’s ours.

And a reminder of Owen’s appeal, published as a comment to the Peter O’Toole article:
Mackem born and bred I was interested to read about the Irish connection and the information that O’Toole senior may have been a Bookie around the time of WW1. A few years ago I wrote a fictionalised version of my grandfathers early life, ‘The Picture of Joe Roc,’ (now an underground classic.) Although my grandfather was French he spent a lot of his life in Sunderland working at Millburns Bakery. ‘Joe Roc’ was the psuedonym he used for gambling, After the book was published someone from Sunderland told me that ‘Joe Roc’ was a common psuedonym used by many gamblers around that time? Can anyone verify this as I have been approached to revise the book for the second edition? There is also a reference to a match in the book, Sunderland v Villa. Cheers Owen

2 thoughts on “Peter O’Toole, Joe Roc and a love letter to Sunderland”

Next Post
Wolves maul Sunderland in another Hetton horror show