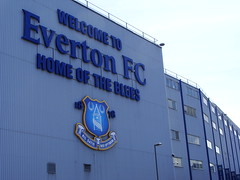 I never worry about players from opposing teams as “on our day” we can give anyone a run for their money, look at the draw against man united. In terms of players to fear….. Well every players is on or off the boil.
Cahill and Coleman are on form at the minute.

We will never get the 1980s era back – Liverpool saw to that. What has been and gone we have to live with – I was pleased to have been a part of it and see success for my team. We will see snippets of it again, but realistically unless Kenwright is tempted by the greed and we are bought – that great success is a long time coming.

I hate the derby games with Liverpool – they have never been the same since the start of the millennium. As the younger generation comes through the bitterness is back. Gone are the days when I could get a ticket for my friend and vice versa who is a red. The family just agree not to speak to each other until two days after the game.

What took you to the North East and what do you make of our own rivalries?

Work brought me up to the North East. In terms of rivalries – you cannot exactly call it a derby as both teams are not in the same city. I don’t particularly like Newcastle – they are not dissimilar to Liverpool – win a couple of games and they’re best team in Europe. As for the loyalist fans in Europe – they all talk a good game of football but when I ask the Geordies had they been the game none of them appear to go!!!! Grabbing 10 minutes on MOTD is not a true analysis!!!!

Salut! says see also: the need to change our record vs Everton – and why beating Chelsea meant more than being thrashed by Newcastle

Paul Bracewell – most influential player of my youth.
Dixie Dean – Speaks for itself – 60 goals in one season
Duncan Ferguson – he was a legend and I man who stuck to his word
Neville Southall – If he had been English – Shilton would not have been between the sticks for as long as he did.
Bob Latchford – Too young to see him play
Kendal, Harvey, Ball – the Holy Trinity – History is passed on in our family.
Sheedy – Best free kick taker EVER – better than Beckham.

Gary Lineker – Will he ever admit he played for Everton.
Francis Jeffers – He was a tool to kiss the Arsenal shirt
Jury is out on Rooney
Back of the Echo – Baccayoko – can’t remember how to spell his name.

Do you have any knowledge of or feelings about Sunderland – the club, the fans, the city, the region? And any memories of Peter Reid as Evertonian?

Peter Reid was a great player for Everton who got kicked off the park every week but was a battler. He always give 100 per cent every week. He eats breathes and live football.
Sunderland has always been my favourite away game as I have great mates who support Sunderland. I was at the 7 – 1 or was it 7 – 0 against Oxford when Stadium of Light had just opened.
I remember the pies used to be cold for away supporters when at Roker. Drinking in the Bluebell near Roker. I was also at Dickie Ord’s Testimonial only because Bracewell was playing. Everyone got is as a junior that night £5 !!!! I have never had any trouble at Roker or Stadium of Light – always felt welcomed and we always welcome Mackems at our pub in Liverpool – Black Horse – Walton Church.

Get a grip of the referees…. They are the biggest biased cheats. How many games now do you talk more about referee decisions than the actual team performance – Referees cost the game more times than anything now.

What is your honest view of corporate football and the way the game has gone?

Football is a sport – entertainment – when did football become theatrical!?! Far too much money on players – the manager’s job becomes harder and harder – How are managers meant to motivate millionaires !?!

Every home game – league and cup!!! – half the away games if possible. I will be at the Stadium of Light tonight.

Draw written all over it.

I chair the North East Branch of Everton Supporters. We travel to home games in conjunction with the Cumberland Supporters who operate a bus to the game. We have free membership and we are affiliated to Everton Football Club – If you know of any Evertonians out there – please ask them to contact us via the Regional Supporters at this link on the Everton Website