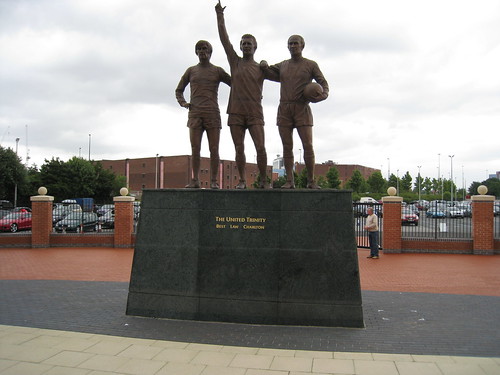 So what if Sir Alex comes knocking on Steve Bruce’s door to request and require the signature of Jordan Henderson? Our United friend Andrew* may be a shrinking violet – no photo/no surname though he does run the Stretford End Arising site, with which Salut! Sunderland has excellenrt relations – suspects we could hold out for Welbeck plus cash, though he would really rather have him back. Ditto Andrew: we’d sooner keep both at the Stadium of Light.

Plenty of other interesting thoughts – avert your eyes, Darron Gibson, and Newcastle fans, too (“above their station”) – ahead of our big Old Trafford clash …

Salut! Sunderland: Top of the Premier, doing OK in the Champions League but it doesn’t somehow seem a vintage United year. Fair point or nonsense?

Probably a fair point, though I do believe we’re gradually improving.

At the start of the season we had defensive issues. Jonny Evans has faced the most criticism for this, which I felt was harsh. He wasn’t the only underperforming member of the backline; John O’Shea and Patrice Evra were also poor, yet most pointed the finger at the younger defender Evans. The defence has turned around since the return of Rio and the introduction of Rafael at right-back. We look far more solid and less prone to sloppy errors.

Centre midfield is another area of concern. Carrick has his critics (I’m a big fan), Fletcher has yet to rediscover last season’s form, though his verve and commitment remains and unfortunately Scholes is unable to play on a regular basis. Anderson has recently returned and shown real glimpses of his first season promise. He has added energy and drive to midfield, which we have occasionally lacked. Hopefully he can maintain his current form over a sustained period.

We normally click into gear during the second half of the season. Fergie times the run in perfectly making sure his players are approaching peak fitness and form towards the latter stages of the season.

Whatever your reply to that, have Premier standards – especially at the very top – declined generally or is it good to see teams like Sunderland, Bolton and others pushing for places in Europe?

Quality at the top has perhaps dropped off compared to two seasons ago. The overall standard has improved with the likes of Sunderland, Bolton and Blackpool impressing. Personally, I prefer a strong league where results are less predictable than say La Liga, which is a glorified SPL in my opinion. Watching La Liga is boring. Evidence that television money spread throughout the league makes for a far more interesting competition.

What were your minimum and maximum expectations at the start of this season?

At the start of every season I expect us to challenge/be competitive in all competitions we’re involved in. To win a trophy is a minimum, preferably the Premier League, especially this season to become the first club to win 19 league titles. A realistic maximum expectation would be to win the Premier League and Champions League. I could say the four competitions, but to achieve such a feat is rare and unlikely.

If it came to SAF wanting Henderson and Bruce making Welbeck a must-have component of the deal, would you regard that as acceptable – and which club would need to top up with cash?

Personally, I’d be against the idea of swap deal involving Welbeck and Henderson. I like Welbeck, he is a player of real potential (as is Henderson). With game time limited at United I was delighted he secured a loan deal to Sunderland. Over the last year or so he has grown into his body and now looks an imposing figure.

Henderson has impressed on the couple of occasions I’ve seen him play. He struggled against France, but he was restricted in the role assigned to him by Capello. Fergie likes a player with a good engine so I’m not surprised by his apparent interest.

Which club would need to top up with cash? I’m guessing United. We generally are required to pay over the odds when signing a player from an English club, especially when the play in question is English.

United fans have to take a lot of banter, not all of it good-natured, about their supposed arrogance, their alleged detachment from the city in which they play and the transition from club to brand. Elements of truth or the pathetic bleatings of envious rivals?

I’m fairly laid back when it comes to banter between fans. If opposition fans hate us, so be it.

When United recently played Manchester City I asked my Uncle (who is a City fan) to answer questions about their season to date. Of course City fans jumped at the chance for some banter. I found their comments funny. Water off a duck’s back to me.

What do you make of Sunderland’s emergence as a home from home for United players and staff who are either unwanted at Old Trafford or need experience elsewhere?

Pleasing to see former or current players given an opportunity elsewhere. Delighted Bruce is performing well as a manager. In August I felt he would come under pressure if Sunderland started the season poorly. How do Sunderland fans feel about the number of ex-United players? Happy as long as the players are performing?

I think your second question back at me answers the first. But I’m meant to be asking them, not you! What have been your highs and lows as a United supporter?

Wining the Premiership in 92-93 after 20 odd years without success is a special high. Losing the Champions League final against Barcelona in 2009 was a low. We were outclassed on the night and deservedly lost.

How would you feel about a future cup game, improbable as it may be, involving United and FC United of Manchester?

Imagine the media attention the tie would attract… Perhaps for the best the two didn’t meet in all honesty, would be an awkward situation for both sets of fans. FC United fans will boycott if the match was at Old Trafford, not wanting to give the Glazers any money.

Name the players you rely on most, those you need at Old Trafford and the ones that simply have to be shipped out.

Nani, Vidic, Rio are probably the three players we rely on most, well for this season at least. Nani’s form during the calendar year of 2010 has been sensational. He perhaps doesn’t receive the deserved recognition. Vidic is a rock and Rio in my opinion has been the best defender in the Premiership/Premier League era. When Rooney rediscovers form he will also fall under this bracket.

Darron Gibson is the player most United fans want shipped out. I feel the criticism he receives is a tad harsh. He is no world beater, but he has not been allowed the opportunity of an extended run in the team to prove his worth.

How do today’s stars compare with Best, Law, Charlton etc?

No longer can you relate to the modern footballer, the majority of them are on a different planet. This does not particularly bother me in all honesty. I’m not interested in celebrity culture and the activities of player once he has played a match or finished training. Perhaps my attitude may have been different if I was younger when I had a greater attachment to players. I only become interested in the off-field activities of a player when their form is affected.

Any thoughts not already expressed above on Sunderland: the club, the city, the fans?

From looking in from the outside Sunderland appear to be a proper football club. Niall Quinn’s involvement may give me this impression… Put it this way, I prefer Sunderland over Newcastle. Them lot are above their station.

Did England’s failure to win the Fifa vote to stage the 2018 World Cup bother you?

A little. Not the fact England lost, if Russia had the better bid, fair enough. Or if Fifa wanted the World Cup in a new location, fair enough, but at least inform bidding countries of the situation so money is not wasted. To receive only two votes with one being from our own representative is laughable in my opinion.

Is it time to abandon high-minded objections to cheating – diving, feigning injury and haranguing refs to get opponents booked or sent off – and accept it as part of the modern game? If not, how can it be stamped out?

Not a fan of diving, cheating or feigning injury. How to stamp out cheating? Allow retrospective action and punish cheaters with a 1-5 game ban, depending on the severity of the incident.

I’m a season ticket holder so will be attending on Boxing Day. Expecting a tight game, perhaps 2-0 for United. Cattermole’s absence is a big blow and of course no Welbeck. I’m hoping Berbatov can grab a couple of goals. Before the season started I predicted Berbatov would score 15 goals before 1 January 2011. He currently has 12 for season and has only the fixtures against Sunderland and Birmingham remaining before the New Year. Tried to place a bet on Berbatov achieving the feat, but the three bookies I tried wouldn’t offer odds.

I became a United fan around 1985/86, but I was never a huge fan. I preferred having a kick about in the local park rather than watching/supporting a team. My love for United started to grow a couple years later when I began to understand football. My first game was the final league match of the 1989-90 season against Charlton Athletic. Remember little about the game. The two things I do remember is a bloke stood behind me with a tattoo on his arm and taking the short trip to Old Trafford in a brown car owned by the father of a mate. I’d never seen a tattoo before and was amazed. Oddly enough I can still picture him now, weird. I must have had a sheltered up bringing ha ha. My favourite player at the time was Giggs. There was plenty of buzz surrounding him. With me being young and impressionable I liked him. However, my all time favourite United player is Scholes.

4 thoughts on “Manchester United v SAFC: who adds cash in a Welbeck/Henderson swap?”