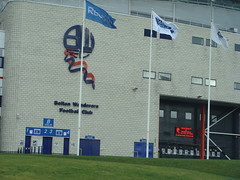 Next up among the Bolton fans who answered our “Who are You?” Mayday message: not my old camarade Ian Jones, royal photographer of note (Monsieur Salut, naturellement, has republican tendencies but we always worked together well), but the next best thing, his brother-in-law Peter Stott*. Interesting thoughts, not least on a certain “comedy club” and a surprise relegation candidate ...

Salut! Sunderland: What a great start for Bolton. – you must be getting nosebleeds? Is it purely down to Owen Coyle?

Absolutely. Owen Coyle has only made a couple of additions to the squad that he inherited from Gary Megson but he has totally transformed the style of football we play. The mustn’t lose style has gone and has been replaced by attractive passing and attacking football. There have been several games this season where the team on the field had none of Coyle’s signings but played in the Coyle style. Tat in itself demonstrates that its down to Coyle because we never saw anything attractive when Megson was in charge.

My maximum ambition at the start of the season was a trip to Wembley and enjoying watching the Wanderers again. My minimum was to be embroiled in a relegation battle. I was disappointed with the team and result at Burnley in the Carling Cup, because that competition is the best chance of getting to Wembley. My ambition now would be to get into Europe again and a good run in the FA Cup, avoiding the bigger teams.

I have been very impressed with Stuart Holden this season. When he was out for a couple of matches we did not perform at the levels we had been at. Kevin Davies is an excellent captain and gives defences a torrid time. At the back I have been impressed with Zat Knight and dare I say Paul Robinson. Every team needs a hard man.

We won the FA Cup twice in the 50s and have never won the league so I would suggest that we can return to those “heady” days.

The atmosphere is great when the fans are up for but generally the atmosphere isn’t that good. With the style we now play I am hopeful that the fans may return and with that a better atmosphere. Regarding the away support we generally have a decent vocal following.

My high was the Reading play off final and my low was the play off semi final defeat against Ipswich.

What about Sunderland? What do you make of us, Steve Bruce, the city, the fans?

Sunderland are a well supported club whose fans get naffed off if you call them geordies. Steve Bruce seems to be doing a great job in a great city.

Is there anyone in our team you’d snap up given the chance?

Darren Bent. He has not been given enough opportunities in the England squad.

They are a comedy club. What they have done in recent weeks is unbelievable and hopefully they will get what they deserve. I thought Blackpool were everyones favourite second club.

Anyone caught cheating should get an automatic five match ban. That would stop it.

I thought this years world cup was very disappointing. I can’t remember one decent game. The FIFA vote was a joke and I’m bored of watching England now. The same players who have failed time and time again. Capello should have been sacked and a new manager brought in with a remit that no-one over thirty plays and that a team is developed for the future.

The only thing Bolton need to do to improve the matchday experience is get decent staff in the kiosks.

Top will be Man Utd, Man City, Chelsea and Arsenal in that order. West Ham will finish bottom, with Wolves 19th and Villa 18th.

Unfortunately I won’t be at the game. I will listen to it on Radio Manchester. I’ll go for a 2-2 draw.

* Peter Stott on Peter Stott:. I’m 43, a financier and married to Caroline with who I have two daughters, Molly and Daisy. I’ve supported Bolton all my life and go to all the home matches with Molly and sit next to my sister and her son and his mates.

Next Post
SAFC v Bolton: a woman with Megson in her sights