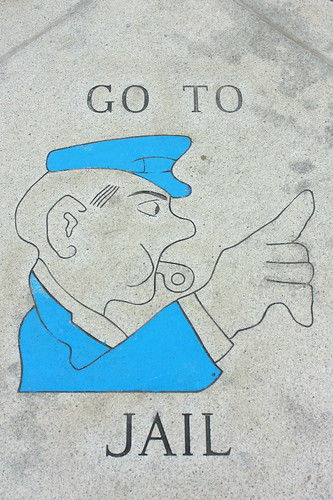 So you didn’t know the Stadium of Light had a secondary role as part of HM Prison Service? Read on …

From the Sunderland Echo‘s Graeme Anderson comes as welcome a spot of news as we’ve seen since, well, Danny Welbeck returned from injury.

Sunderland, he says, are considering how to move away fans to a different part of the Stadium of Light than the large, usually too large, section of the South stand they are currently allocated.

It may, as Niall Quinn is quoted as saying, be harder to do than it seems. But since the idea of looking at it comes after concerns were raised by not only Steve Bruce but the owner Ellis Short, it should be safely assumed the outcome will be solutions not problems.

Every Sunderland supporter knows the current location is wrong.

It is too prominent by far – just look at where we are stuck when we travel away, and I am not just talking about St James’ Park – and looks embarrassing when, as often happens, the away club sells only a small proportion of its allocation.

Quinn told the Echo: “It is something we are looking into … But it isn’t straightforward by any means because, when the place was built, it was specifically designed the way it is and a big change like this would be quite complicated and potentially very costly.

“There are prison cells in the away section which would need to be moved, the police monitoring system is directly above the away fans and that would have to be moved, too.

“There are also things to look at like changes to drainage, access, the possible installation of lifts and safety issues.

“As things stand, the ground completely complies with safety standards and any changes would mean those standards would have to be looked at afresh.”

Let us leave aside the mischievous thought that some clubs bring so few fans that the prison cells should adequately house them.

Where would we aim to put the travelling contingent?

I would not be as vindictive as Newcastle and find the highest and most ghastly part of the ground for them. It was a comparison of how we are treated there, and their fans are treated at our place, that inspired Ellis Short’s desire for action.

But I would give them a chunk of, say, the upper tier of the East stand, nearer the corner flag than the halfway line, as that would equate more fairly to our own experiences as away supporters of SAFC.

Also, what would we do about the south-west singing corner? Its occupants would surely want to follow the away supporters to, as it were, keep them company.

These are questions the club clearly realises must be answered. The SAFC chief executive Steve Walton talks about the need for the move to be economically and practically viable and says categorically that it “won’t happen for next season”.

But Bruce’s views, as expressed to the Echo earlier this season, should be taken fully into account and will be if, as seems the case, they reflect the owner’s thinking:

“I don’t see why fans come to our stadium and get some of the best seats in the house, when the same doesn’t apply to us elsewhere.

“But, as a manager, my main concern is that when clubs, especially clubs with big travelling supports, come to our ground they are placed directly behind a goal and are in a great position to affect the atmosphere and influence the game.

“I don’t see why visiting teams should have that advantage coming to our place when we rarely have it at theirs.”