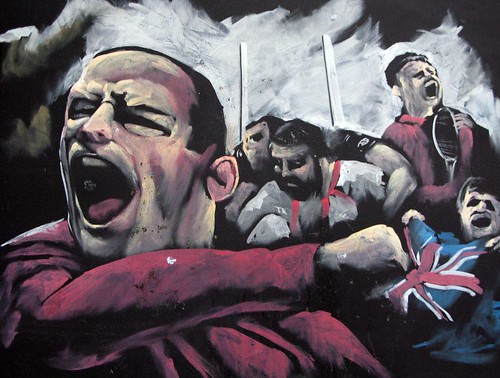 Wayne Rooney is not necessarily the first person you’d think of inviting to tea. Gordon Taylor, chief executive of the Professional Footballers’ Association, may not always say things we can all agree with.

But am I alone in wondering whether Taylor may be right to question the furore over Rooney’s unconventional way of celebrating his hat-trick against West Ham?

This is what the PFA man says of the FA’s charging of Rooney for use of abusive language:

“Whilst the use of foul and abusive language is not condoned, there is an acceptance by all parties within the game that ‘industrial language’ is commonly used. It becomes an issue when directed towards match officials. However, when used in a spontaneous way in celebration or frustration then it is not normally expected to merit a sanction. If sanctions are to be imposed in such circumstances then this has to be done in a balanced and consistent manner, and participants made aware of this fundamental change in approach.”

Like Taylor, I do not condone Rooney’s actions. Like him, I would love to see a spot of consistency (and he didn’t even mention, as far as I know, the abusive chanting that may well have goaded the United striker).

One player’s rant is no more deserving of witchhunt and exemplary punishment, just because he happens to be very famous and also famously cantakerous, than another’s. I also bear in mind my occasional intemperate reaction to people who put my life and theirs at risk on the road. Holier than thou I cannot claim to be in terms of the use of “industrial language”, much as I would love to regard it as way beneath me.

Rooney dd it. With whatever level of sincerity, or PR prodding, he publicly apologised. If I am to be completely fair and honest, I would say that’s that. He may get his two-match ban if the FA insists on being guided by journalists who – and this I know to be true since it’s my trade, too – use as bad if not worse language in their own working environments. But that – Rooney’s scapegoating – wouldn’t make it right unless the book started to be thrown at everyone else, too.

Two admissions. First: I did not see the incident and cannot retrieve it on the internet. It’s been much talked and written about.

Second: nor did I see Arsenal players surrounding Phil Dowd to urge him to send off Steven Nzonzi for what was, from reports I have seen, a clumsy rather than deliberately dangerous challenge on Laurent Koscielny. Graham Poll did, and commented on it in his Daily Mail slot yesterday. He thought it a red card offence and said so; he also said Dowd was able to reach the same conclusion without needing the “player pressure” that was inappropriately applied.

So I may as well let it be known: I deplore Rooney’s conduct, but if he is to be penalised for his, then let us sanction the Arsenal players for theirs.

Trying to get an opponent sent off should form no part of a professional footballer’s make-up. A captain is entitled to approach a referee and make representations in a general sense (eg “look ref, we’re being kicked all over the shop here”) or to plead the case of a teammate. If players crowd an official in an attempt to dictate yellow or red card, they should also be penalised for ungentlemanly conduct, outdated as that will sound.

It’s the sort of behaviour that, along with diving and feigning injury and sly tugs and blatant thuggery, helps to make the game stink. Sorry Arsène, among whose admirers I count myself, but that’s how I feel.

29 thoughts on “Rooney’s rant, Arsenal’s crowding of Dowd: which is worse?”

Next Post
Phil Cronin, Tombola and Sunderland: some words from the sponsor