What did others – Blues fan included – make of the alleged Bardsley stamp? Was my own defence of him naive? STOP PRESS: see Fitz’s comment – no appeal, now confirmed by safc.com. which suggests we must accept the worst interpretation of the episode. There was, sad to say, no need for quotation marks around the word “stamp” in my headline …

One of the few Sunderland players to perform with consistency and unlimited passion over the past year or so has been Phil Bardsley.

I like to think of him as an honest player with shedloads of enthusiasm and courage. He has limitations but plays to his strengths as a solid defender who offers a bit of menace, and even a decent shot, when going forward. And he does it just as well if forced to play out of position.

But is there a dark side, too, to Phil? I hope not.

Just when you might have hoped that among all our other woes, at least Bardsley had been given the benefit of the doubt over the alleged stamp on Chelsea’s Juan Mata, along comes an FA charge that will slap a four-match ban on him unless a successful appeal is made today.
.
I saw the incident, albeit on screen. The commentators made much of it, one saying “only Phil Bardsley knows whether that was intentional”.

My first reaction was that it was indeed an accident; there had been no clash between Bardsley and Mata, the latter being on the floor after being bundled over by Gardner. Bardsley seemed to catch him while trying to leap over his fallen body to push clear with the ball.

He immediately turned as if to acknowledge his guiltless action and ensure his opponent was all right.

Was that last gesture the mark of an innocent man, as I took it to be, or a cynical attempt to have it both ways: inflict the damage and then act as if it had been the last thing on his mind? The studio team was in an uncharitable mood and tilted towards the harsher interpretation.

Bardsley insists it was an accident, according to reports. Unfortunately, his record – one sending off already this season – will not help his cause.

If it was not an accident, that would reveal a worrying aspect to his game to the extent of making me revise my view that when he was booked for alleged diving (after no contact from Ryan Giggs) in a match at home to Man United near the end of the 2009-2010 season, he was guilty not of cheating but of falling over.

Salut! Sunderland has never wavered in its condemnation of cheating in football, whoever cheats. And I said at the time that if it was a dive, Bardsley should be fined a month’s wages for turning a goalscoring opportunity into a yellow card. And if he genuinely stamped on Mata, and then pretended not to have done, I’d make that three months’ pay.

Whatever the outcome of the appeal, assuming one is made, it remains the case that only Bardsley knows the truth, just as only he knows whether he fell or dived against United.

Our disciplinary record is not a great. We give away ludicrously dangerous – and unnecessary – free kicks around the box. Every so often something goes on in the penalty area that has hair standing on end, or would do if I had any, even if we get away with it. I am not even sure I agree that Cattermole has become less reckless; he made one dreadful challenge at Anfield and has been substituted relatively early in other games.

But it would be hard to bear if a man who usually embodies the never-say-die approach Sunderland supporters admire should be decreed by the FA disciplinary machine to be capable of moderately serious and craftily disguised nastiness. 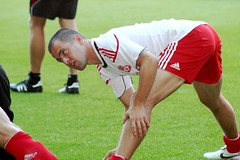 * No French Fancies this week: not enough to say, though Joe Cole’s performance when he came on as a sub for Lille at Saint-Etienne, and the glowing reports he received (made one goal and left three or four opponents standing with one little run), had me wishing my Bienvenue en France Joe & Carly posting at Salut! had been Welcome to Wearside. The manager at Lille, Rudi Garcia, calls him the “most Latin” of English players and we could do with a little of his creativity.

11 thoughts on “Bardsley’s Chelsea ‘stamp:’ just when you hoped it couldn’t get worse …”

Next Post
Steve Bruce gets major boost: absolutely no vote of confidence