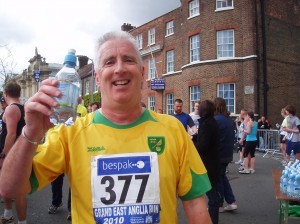 Norwich, like Swansea, have impressed most neutrals with their progress so far in the Premier. Indeed, they did better than us in the FA Cup at the weekend. Robin Sainty*, chairman of the Independent Norwich City Supporters’ Club, would have settled for just staying up. Here, ahead of tomorrow’s Sunderland v City game, is his look at Bruce and O’Neill, both closely associated with both clubs, our own poor display at Carrow Road this season and that cup final …

Salut! Sunderland: No sign of Norwich sinking without trace this season. Ninth and comfortable as I write though I appreciate that may change. Are you surprised by your steady first half and what is your assessment of Paul Lambert?

Nobody wants to get too carried away, but we look very well set at the moment with only one defeat in our last eight League games. Defensively we were a little naive to start with but have tightened up, as the clean sheet against Chelsea demonstrated. The key is that we can score goals from anywhere, rather than being dependent on one player, and have been reasonably fortunate with injuries. We also have a squad where no one is simply making up the numbers, and they’ve all contributed at some point.

Follows on from the first question: what were your minimum and maximum expectations before the season began?

Minimum expectation was that we wouldn’t disgrace ourselves and maximum was simply to stay up. We were in League One two years ago, so there was a real risk of going too far too soon. Inevitably our good start has led to some unrealistic expectations, but anywhere above 18th will do for me, although we look capable of a decent mid table finish at this point.

You beat us quite comfortably at your place, and Newcastle too. What did you make of our performance and theirs?

In all honesty I was disappointed with Sunderland at Carrow Road. You had lots of possession but didn’t really have any penetration, and, as you say, it was quite comfortable despite your late goal. We simply had too much for Newcastle on the day, particularly in the air. I expected them to be much better to be honest, but I think teams are finding it hard to come to Carrow Road this season, particularly when the fans get right behind the team.

Steve Bruce as manager and Martin O’Neill as both player and manager are part of modern Norwich history. Your thoughts on our new manager and the man he replaced?

Bruce was superb as player for us, although he pretty much forced his transfer to United when we had built a really good side, but he always gets a decent reception. As a manager I think he’s done reasonably well, but never seems to deliver sustained success. O’Neill was a wonderful player for us and could have been one of the great City managers had he not left after six months when the chairman wouldn’t back him in an attempt to buy Dean Windass. It’s no secret that Paul Lambert has massive respect for him and I think he’ll do a great job at Sunderland.

Who are the players who have made the difference for you and where are you still weak (again subject to what happens between now and the match in the transfer market)?

Grant Holt has been immense since he came and is a Norwich legend, but most of Lambert’s signings have made big contributions. The key to our success is teamwork and not having stars, with everyone chipping in. I think we could do with a little more pace overall but other than that I’m fairly happy with what we have. Obviously we hope to strengthen in the window, but we won’t sign players for the sake of it at silly prices, particularly as we have two players, Ward and Vaughan, about to return from long term injury.

Who are the best players you have seen in Norwich colours, or wish you had seen, and who wasn’t fit to wear them?

Martin Peters, Martin O’Neill and Colin Suggett were wonderful footballers, but my favourite was Kevin Reeves, who could make or score goals and would certainly have got a lot more England caps had injury not intervened. Ian Crook was another City legend and we’ve been blessed with some great keepers, like Keelan and Woods.
As for who wasn’t fit to wear them, I’d have to say there were plenty in the last few years, particularly during our slide to League One. The fans will never forgive gutless capitulations at Fulham and Charlton to seal relegations.

And what have been your own highs and lows as a Norwich supporter?

Highs would be the various promotions, the Milk Cup and our aggregate victory over Bayern Munich in Europe (we are still the only British team to beat them in Munich, as we recently reminded the Manchester City fans!).
The big low would be relegation to League One after 50 years. It was like the end of the world!

Have you memories – good, bad or amusing – of any past encounters with Sunderland and are you old enough to remember the Friendly Final?

I was there, and it really deserved its name. I’ve never been to a big game where fans mixed so well and bear in mind that this was the mid 80s, when football violence was still a big issue. We were amazed that Sunderland fans were coming up to us on the way out and congratulating us. I’ve had a soft spot for Sunderland ever since.

What is your impression of Sunderland: the club, the city, the region, the fans?

To me Sunderland is a proper football club with real grassroots support, rather than the prawn sandwich brigade that we’ve seen at United and Chelsea. The Premiership is full of passionless grounds and plastic fans, but in the North East the real spirit survives, and I’d like to see you have some real success. It seems to me that, like Norwich, your club has kept a real connection with its fanbase.

What will be the Premier top four, in order, this season and who is going down?

United will win because of their know how, with City (Manchester, not Norwich!) a close second, Spurs third and Chelsea fourth.
Bolton, Wigan and Blackburn will go down as, sadly, QPR will buy themselves out of trouble.

If our clubs featured in neither list, where will we finish in May?

I think we’ll both be comfortably in mid table.

Club vs country: which comes first and why?

Club every time. I can’t get excited about England anymore. The players don’t seem to care, so why should I?

The Osman Question. It was the Eduardo, Walcott and Barton question, which covers diving and feigning injury (and in the case of Osman, falling over without contact and claiming a penalty): what is the form of cheating you most dislike and what would you do about it?

Players deliberately trying to get opponents booked or sent off, either by pressuring the referee or overreacting to minimal contact. It’s a man’s game, so act like men! Refs need to issue a lot more cards in order to eliminate it from the game. Unfortunately FIFA and UEFA’s apparent attempts to make tackling illegal haven’t helped!

What single step, by Norwich or the football authorities, would improve the experience of ordinary supporters?

Getting rid of goal music and orchestrated singing. Let the fans create the atmosphere like we used to in the old days. I’d also like to see club’s bring back standing areas in a controlled fashion.

If it had been a Saturday game I wouldn’t have missed it for the world, but sadly I can’t make midweek. You’ll score but so will we, so I’m going for an honourable 1-1 draw!

I’m a 55 year old chartered financial planner and have run my own business for 21 years. I first went to Carrow Road in 1967 and, although I played and managed in semi professional football for over 20 years I got to games whenever I could. These days I can concentrate on the Canaries as a season ticket holder and get to as many away games as I can. I’m also the chairman of the Independent Norwich City Supporters’ Club, which provides lots of benefits for fans. Details can be found at www.incsc.co.uk

15 thoughts on “The Norwich Who are You?: ‘my soft spot for Sunderland’”

Next Post
Soapbox on Middlesbrough: bouncing back from our ‘had-to-happen’ moment