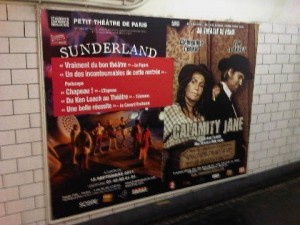 It is a great feeling to be changing lines on the Metro in Paris and find a poster for Sunderland the play, currently running at the Petit Théâtre de Paris, staring you in the face. Equal billing with Calamity Jane – Jane, not Steve, you’ll note – which is being presented at the bigger (ie no Petit) Théâtre de Paris in the same building in the 9th arrondissement.

An even better buzz comes on entering the theatre, after a delicious meal of andouillette (a sausage made from pig’s colon, but we’ll say no more about that) and chips at a brasserie down the road, and seeing Salut! Sunderland up in lights, too. In the theatre, not emblazened on porcine intestines.

The story of the play’s runaway success was first told for English-speaking readers at this website, as far as I know. Others followed, including The Times, The Independent and the BBC among them. But there it was, my article prominently displayed on a board showing off all the glowing reviews Sunderland has had in the French press. 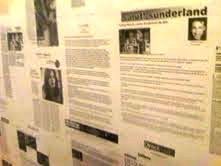 The cast, led by Elodie Navarre as the main character Sally, is excellent. Vincent Deniard, as the Sunderland fan Gaven (is anyone ever called Gaven with an e?) is superb, with plenty of allusions to Tyne-Wear rivalry, and the gamine Léopoldine Serre as the teenager (but fear not, she isn’t really) is not only sparky and convincing but gave me a cheery bonsoir as she left after the show. I managed a bonsoir, et bravo in return and was rewarded with a warm smile.

Among the gags Koch injects into his script to lighten the darker aspects of the theme, Sally says it rains so much in Sunderland that it feels like living in a washing machine. Well, Paris has its inclement moments, too, and I saw the play on a night so cold you thought your ears might freeze and fall off.


The friendly usher kindly kept a poster for me to take away afterwards. Less kindly, despite a good deal of sucking up on M Salut’s part, he removed the Salut! Sunderland cards I had carefully arranged in a little basket on a counter. Trouble is, the Nicklas Bendtner “don’t you know who I am?” line would work no better with a Parisian theatre worker than it did in a Copenhagen pizza parlour. Especially if you have no real follow-up line.

The French reviews have been extravagant, comparing Koch to Chekhov, Dickens and Ken Loach and talking about the play as a latter-day Brassed Off or Fully Monty.

Elle magazine says it would make a good British film of that ilk. I have news for Elle, and for you. Options on the script have been bought by Richard Pezet, a leading French producer associated with Pathé, and he hopes it will indeed make the transition to the big screen.

Stand by for cast and crew to descend on Sunderland, take in a few games and shack up at the Seaburn Marriott or Roker hotels while making the latest gritty working-class movie?

Er, non! The current idea is to relocate the story to St Etienne.

Actually, for a French film of the play, that make sense. The Sunderland-Newcastle aspect is adapted to St Etienne’s hatred of Lyon and the town itself has suffered a decline in traditional industries including – and this surprised me – coalmining. I have told the producer he could always give a walk-on role to Steed Malbranque, briefly a St Etienne player after leaving Sunderland, and rope in Patrice Carteron to give the publicity a push; he played for both Lyon and St Etienne and, of course, scored for us against Newcastle (I remember watching that game in a Lyon bar; all the French cheered loudly when it went in, to the dismay of a couple of Mags).

Who knows how the plans may yet change? The French version would struggle to be more than an art-house film in the UK, but stands a decent chance of being a hit in France. An English version, keeping Sunderland as the location? Your guess is as good as mine.

Clément Koch, who studied at Durham and worked at Nissan as a young man, forming some affection for the North East, and Sunderland in particular, is pleased to be raising the city’s profile a little. He doesn’t go overboard; when I asked whether our revived fortunes, and the role of Sess, a former Paris St Germain player, was putting Sunderland on the map, he said the average Parisian theatregoer was “more Bo-Bo (bourgeois Bohemian) than PSG fan”.

But in a message to me when I was fixing up to see the play, he did say this: “At least now the French will know where Sunderland is on the planet. Most of them thought the title of the play was just a joke on the land of the sun.”

9 thoughts on “Sunderland, the play wowing Paris, to be St Etienne <em>le film</em>”

Next Post
The Boro Soapbox: Sess sees off the Smoggies