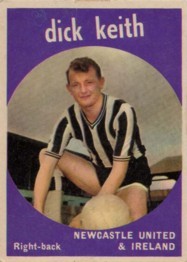 West Brom is beginning to be no more than a bad memory. Not entirely true, of course, but it is time to start thinking ahead to Sunday – early in any ordinary week, but derby week (even if Newcastle United v Sunderland takes place, strictly speaking, next week) is never ordinary. John McCormick is a staunch Sunderland supporter. But it was a Mag who made the earliest impression on him – as John recalls more than half a century later, 45 years to the day after the player in question met a tragic death just a few days before an earlier Wear-Tyne encounter played on the 4th of March …

My dad worked long hours, including weekends, and I can only remember him taking me and my brother to one match.

It was at St James’ Park, which was easy to reach from home, and only a few fragments of the game have remained with me. The opponents were Leyton Orient, the score was 0-0 and when I asked my dad who a certain player was he told me it was Dick Keith.

And that, more or less, was that. NUFC didn’t stick and within a couple of years I was making the more difficult journey to Roker and following heroes such as Montgomery, Hurley and Sharkey.

Not long before he died my dad said I was nine when he took me. That sounded reasonable, but I never really knew if it was right. So, a few weeks ago, with time to kill, I decided to unleash the power of the internet and check. It didn’t take long to find that Leyton Orient and Newcastle were only in the same division for one season. The match had to have taken place on 19th August 1961, a few weeks after my 10th birthday.

But it was something else that proved poignant. Querying “Dick Keith” also brought up sites and information. It transpires that the first professional player I had asked about, and whom I had then ignored throughout my formative years, had been more than just a footballing journeyman – at least for a while. 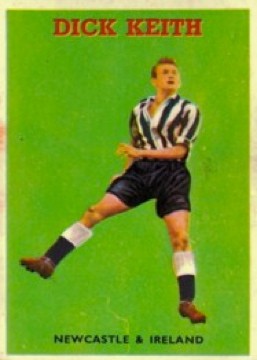 Dick Keith was born in Belfast in 1933. His footballing talent was evident early and he played for Linfield at the age of 17. He became Ulster player of the year in 1956 and moved to Newcastle at the start of the 1956-7 season, where he made over 200 first team appearances (presumably some alongside a certain Bob Stokoe) and became club captain. He represented Northern Ireland 23 times (not “Ireland” as one of the picture cards has it; that sort of error could cause a spot of nastiness at Windsor Park – ed) and was a member of the squad that reached the quarter finals of the 1958 world cup.

However, Newcastle were relegated in 1961 and Joe Harvey, appointed manager in 1962, began an extensive rebuilding programme. Over the next three years he brought in a host of players: Bobby Moncur, Pop Robson and Sunderland’s Stan Anderson are but three whose names live on in the North East. Dick Keith was one of the squad who made room for these changes and he was sold to Bournemouth, then a third division team, in 1964.

His career appears to have continued to wane and in 1966 he moved from Bournemouth to non-league Weymouth, where he combined his playing with a job in a builder’s yard. While working there he was involved in an accident which fractured his skull. He died of his injuries on Tuesday February 28, 1967, at the age of 33.

On the Saturday after his death, March 4, Newcastle played us at Roker Park. I have no memory whatsoever of a minute’s silence or black armbands, nor can I remember Dick Keith being mentioned in the run-up to the game or afterwards.

I hope my memories are wrong. Fans always have their heroes, and every era has its legends, while the media creates and destroys personalities.

This all contributes an edge and brings excitement, and it’s an essential part of the game. But not all players become heroes or legends.

The majority drift into obscurity; some don’t even achieve financial security through a career as a professional footballer, as recent events at Darlington demonstrate. Yet these players – the Dick Keiths of football – are the backbone of our game. Irrespective of their club, they are worthy of our respect and they deserve to be remembered. 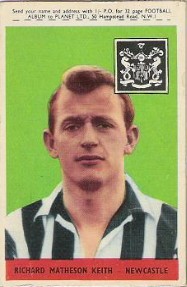 ** Nigel summarises the Dick Keith story in this brief obituary: 28/02/1967. Aged 33. Linfield, Newcastle United (208), Bournemouth (47), Weymouth (26). Won the Irish Player of the Year award (correct title – ed) in 1954. Part of the Northern Ireland team that played in the 1958 World Cup tournament. Killed in a works accident on a Bournemouth building site.

Next Post
Soapbox from West Bromwich Albion: when experience triumphs over hope