Towards the end of Chelsea’s display of opportunistic flair and sheer stoicism to beat Barcelona and reach the Champions League final, one Kurt Sullivan sent a tweet that popped up on the BBC’s online coverage:

“Defending like Chelsea are right now is as much of an art as attacking. It’s as much a part of the beautiful game.”

There was still time for Barca to have agoal disallowed, hit the post and maintain a sequence of elegant, ineffectual passing patterns on the edge of the Chelsea penalty area.

And for poor, maligned Torres to replace Drogba and seize on a rare break to race forward, skip round the Barca keeper and score to make it 2-2 in stoppage time to put the outcome beyond doubt.

When Barca scored in the first half, I expected a drubbing. When Terry was then sent off, I thought I’d be writing about a convincing start to bidding for someone’s ”disgrace to England” awards. ”Totally idiotic,” said the commentator as I watched on French TV. ”A completely non-negotiable red card,” he added later, ”unlike the penalty award.”

And yet I rose above the hatred of Chelsea we’re all supposed to possess and applauded Torres’s goal. You see, being a Sunderland fan, I know what Kurt means.

When Chelsea won the first leg 1-0, I praised a defend and break performance not unlike Sunderland’s to beat Man City’s on New Year’s Day. Ours was treated a little more like highway robbery than is likely to be the case in tomorrow’s Londoncentric, ”Big”Club-obsessed papers and on the airwaves. 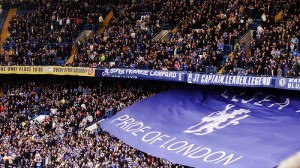 onight was more like Arsenal v Sunderland some years ago, when the infamous Paul Danson pulled on his Gunners shirt and sent off two of ours in the first half (one decision, a second yellow for Paul Stewart for beihg fouled and touching the ball with his hand as he fell, bordered on criminal).

Like Chelsea when in aggregate winning positions tonight, we rarely strayed beyond the halfway line thereafter (Chelsea were happy to stick to one half even before the sending off). Unlike them, we didn’t quite achieve a draw, though Arsenal were worried that we might.

But all part of the beautiful game, the ability to defend as well as attack. Kurt and I will be sure to agree on that … unless he applies the theory only to London or ”big” clubs.

All of which was a mere excuse to urge you to dig deep for a friend, Nic Wiseman, co-editor the much-missed SAFC fanzine Its The Hope I Can’t Stand, who will start the day of our last away game, at Fulham a week on Sunday, by running a half-marathon in aid of his daughter’s school. I’ll let him explain for himself on these pages tomorrow – see this link – but if I’ve already stirred your sense of generosity, please go immediately to his Just Giving page, as follows:
www.justgiving.com/nicwise

7 thoughts on “Chelsea and Barca: when the Torres goal went in, I applauded”

Next Post
Luke’s World: how a second Irish revolution refuelled the faith