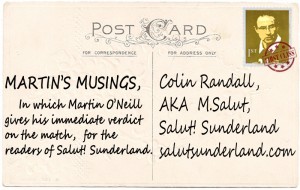 Martin O’Neill is not one to make excuses and in his post match missive this is as close as he has come. But where other men’s explanations come across as whingeing, this manager’s are reflective and realistic leading as they do to the obvious. We were beaten again, by a team who performed much, much better on the day.

The first goal was always going to be a big one. We ran out of legs and looked tired – they were much stronger than us.

It’s been a big effort by the team, but today we came unstuck and Everton deserved to win.

We were missing Nicklas Bendtner, but we should have been able to get on with that.

We have had to make changes a lot of times this year, with players playing out of position – but that’s no excuse because we were well beaten today.

We tired more quickly than I had anticipated.

A few senior players were carrying injuries going into the game – [Lee] Cattermole and [Phil] Bardsley – but they wanted to play and then early on in the second half you could see they were struggling.

They’ve got good hearts and they wanted to play.

I think sometimes the scoreline can be misleading. However, we have been beaten 4-0 and, I think, deservedly so.

6 thoughts on “Martin’s Musings from Everton: not good enough at Goodison”