As if we hadn’t banged on about Villa quite enough (though we do wonder how many Villans don’t yet know one of theirs won the top prize in our prestigious ”Who are You?” awards), now we’re at it again. Or, rather we’re not, not really. Stephen Goldsmith* – as Goldy – has been a frequent, thoughtful contributor to Comments and simply uses the Darren Bent example as the starting point for a riveting read on the glossary of want-away footballing hypocrisy …

How long will it take, I often wonder, for Darren Bent to make back page headlines before I can read the corresponding articles without instantly associating him with Sunderland, and more specifically his departure from Sunderland?

It was near impossible to make that disassociation when reading his latest comments, to the Birmingham Mail, this week.

“People have asked if I was mis-sold the dream when I signed and if I’m honest I didn’t think Ashley Young and Stewart Downing would leave in the same summer,” he said, undoubtedly reassuring all Villa fans. And just to put their minds at ease, he reiterated that he was happy by declaring: “I was linked with a transfer out of here all through January and I didn’t want that then and I don’t want that now.”

Personally I would translate that as “nobody came in for me with a concrete offer in January so I’m still here”, but then I’m very cynical about such matters. 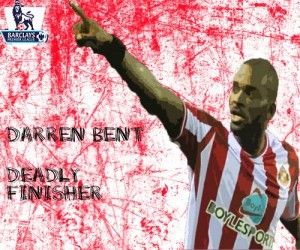 Without wanting to cover too much old ground regarding Bent and his reasons for leaving, it did lead me into having a little debate with myself about the terminology footballers use to camouflage their actual reasoning. I often have these debates with my own mind; sometimes, I think, I need saving from myself.

I couldn’t help wondering what ”dream” it was, exactly, that Aston Villa had been accused of mis-selling to Darren here. He can’t be bigheaded enough to think he was going to propel the squad he joined to the upper heights of the Premier League by himself, can he?

It was very evident to all of us that Villa were using the cash from the ambitious (massive club-like) sale of James Milner to fund this transfer, so we can’t be expected to believe that they promised more £20m+ players. It is certainly those types of transfers that would have been necessary to distinguish them from the side that he was representing at the time. The side that was in and around the top seven while Villa were near the bottom. The side that have a similar, if not better, infrastructure and fan base as/than Villa.

Darren Bent’s choice of the word ”dream” immediately cast my mind back to the influx of players at QPR over the last 12 months, and the recurrent use of this word ”project’’. I wanted QPR to be relegated this season for the purely selfish reason that they are probably going to be after the same kind of players as us the summer transfer market.

Our former player Djibril Cissé is one example of a fine player who has made the switch to West London. Upon his arrival he told the official website, ”QPR have a hugely ambitious project’’, and it is a word repeated with apparent conviction by the modern day player when he signs for a specific type of club.

I think we can all expect a host of very decent players turning up at Loftus Road this summer, all declaring how thrilled they are at being a part of this exciting project. I fully expect Michael Owen to come out and talk of the exciting project he is excited to be involved with, at whichever club’s treatment room he ends up at next season.

So what do these words actually mean? A project, or a dream as Darren refers to it, is some sort of footballing vision, if I were to hazard a guess. Some sort of blueprint to where a club wants to be at and the exciting times that accompany that journey.

Now if I were to think of a club that set out with a dream and executed it commendably, I would look no further than Wigan Athletic.

Dave Whelan has lifted Wigan through the divisions and established them in the top flight for the last seven seasons.

They are properly run, and hell they even play attractive football. That’s a project right there. Good old Wigan. So can we expect to see an array of superstars all bulldozing their way to the DW Stadium this year to a part of this project? Of course not, because by project or dream we all know they mean cash.

I understand, of course, that clubs with huge amounts of money can have genuine aspirations of being better and bigger than Wigan. Man City is one project I can kind of come to terms with. Sure, it’s annoying that they can throw cash around like they do but they were always going to have title aspirations from this and make a significant difference to English football. Before they were bought, Man City like ourselves acquired a 48,000 seater stadium and filled it adequately for a club that had served up years of mediocrity.

Those are big club actions without the bottomless moneypit. QPR is the only side that currently has a lower average attendance than Wigan in the league. This is due in part to the capacity of the ground, I hear some say; well no; it just reflects the overall size of the club, in my opinion. No world domination is possible here.

The cash incentive is no revelation when it comes to Mr Bent of course, nobody bought his move as one of pure footballing reasons then and nobody buys it now.

I think I secretly admire his tactics in going on the record to declare his happiness and giving the fans what they want to hear (as he did at SAFC – ed), while subtly letting us all know his pending reasons for leaving as soon as the opportunity presents itself (ditto – ed). It’s not about money or the size of Villa, it’s about broken promises. It’s not about money; it’s about getting back in the England squad. That’s a good one right there Darren: come on, I’m lining them up for you! Maybe I could be your press officer? I would expect generous remuneration, of course, but it’s not just about that. Let’s think of it as an exciting project for myself.

It’s very possible Liverpool will allow whoever is selected from the ridiculously disrespectful and ambitious shortlist of 12 managers to spend big money. If Stuart Downing and Jordan Henderson can be anywhere near the England squad on current form, then Liverpool is an excellent project for anybody. It is more likely we may have to head to Russia, where the clubs are starting to throw absurd amounts of dreams at players. Sorry projects. Sorry cash. Damn those three synonyms.

It is with my utmost reluctance that I have to leave this huge club. On arriving at the club I was promised that more signings would be made guaranteeing our inclusion into the Champions League in the near future. This failed to materialise and once we sold our best players without replacing them, I found it hard to carry on believing in the project/dream (delete as applicable) that was sold to me.

To show my appreciation and respect to the magnificent Villa fans that have showed me nothing but support since my arrival, I have decided to follow my desire of always wanting to test myself in the Russian Premier League.

Ok with you, Darren? That’ll be 10 grand please.

While reflecting on the multiple reasons Darren can give for his imminent departure, spare a thought for his nemesis Asamoah Gyan. I use this term as they often played together with the chemistry of a super hero and his nemesis. To stick with the super hero theme, I will call Gyan Thunder Stealer. We should sympathise with Thunder Stealer as he doesn’t have the potential repertoire of excuses Bent has at his disposal. He declared his love for Steve Bruce, so he has slammed any manager-blaming reasoning for his departure firmly back in his own face.

If Al Ain were to suddenly sell Ali Al Wehaibi or Helal Saeed, then Gyan wouldn’t be able to portray this to the public as an authentic excuse for wishing to leave. “They have cut off the world renowned supply line of Wehaibi and Saeed, what can I do?” Move to the Russian Premier League would be my bet.

There have been many debates I have entered with Gyan as the topic, and in particular any potential scenario that would result in him returning. I have had such debates on this very site. I was always under the impression that if anyone could persuade me that it would be a good thing for him to return, then that would be Martin O’Neill.

Once he retired from international football at the age of 26 my opinion of him and his pathetic sized footballing heart was reaffirmed. I would hope that none of us would ever be hoping that Gyan wishes to return to the project that is Sunderland.

* Stephen Goldsmith on himself:

31 years old. After spectacularly failing to complete a full year of my A-Levels I have worked in lithographic printing since I was 18 and for years pretty much used all my income to fund self-centred activities for years. Used to travel around Europe watching England (wouldn’t be Sunderland would it?) and up and down the country watching the lads. Weekends were made of away games. Away from football was pretty much the same, nights out.
At 28 I started a combined studies degree in English Language/Linguistics and Sports Studies. Perfect I’m sure you agree. I am still a season ticket holder (of course) but am now a mainly home game man. I am also about to graduate. I have recently become a father and am chuffed to be a coach of under-8s who will one day stun the Stadium of Light.