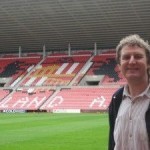 Not really an end-of-term review, though it starts that way, so the morning after more playoff games seems as good a time as any to throw open the Salut! Sunderland floor once again to Ken Gambles. It also gives readers another chance to stand up for, or slag off, West Ham: my wager is they’ll do better than Reading or Southampton if they go up …

Well,the dust has almost settled on our season as we drift towards the lower middle of the Premiership.

It’s been a fairly anti-climactic ending after we threatened a top half finish for so long.

In yesterday’s Guardian match report, neither Sunderland nor any of the players were actually mentioned, which seemed fair enough given recent displays.

Overall, however, it’s a case of glass half-full for me and I look forward to the summer comings and goings as O’Neill looks to improve the squad. He will certainly be aware of our shortcomings and strengths (as we all are ) and I’ve every confidence that he will get it right.

But despite some initial misgivings about the system I am now hugely in favour as it keeps the season alive, although there should be some fundamental changes to make it fairer.

I know that prior to the season all clubs are aware of the rules, but there is something inherently unfair about a club finishing with a dozen or so points more than another and yet having exactly (well almost) the same chance of gaining promotion. I can vaguely remember in the early years that Wolves finished about 18 points ahead of Aldershot yet lost to them in a two-legged semi-final.

A better system would be as follows:

* The side finishing 3rd would go straight to the Final.

* The 6th team would be away at the 5th for one game only. Extra time would be allowed but no penalties, so the away team would need to win.

* The same would then apply to the winners away at the 4th placed club.

This system would reward the season’s performance, streamline the whole process and, while maintaining the excitement, be much fairer.

And while discussing change, isn’t it about time that it was a case of three up and three down between the Football League and the Conference?

Promoted clubs have shown their mettle over the years and this change would also provide an easier route back for relegated clubs.

Take this season’s Conference play-offs where Wrexham, York, Mansfield and Luton battle it out for one place (owing to Fleetwood’s vastly superior financial position) yet each would be more than capable of sustaining a successful Football League side. Fair enough West Ham, Monsieur Salut may say, but as if to prove my point, Luton have just got through to Wembley despite finishing 17 points behind Wrexham, the team they beat.

To conclude this ramble, I’ll grudgingly admit that the Mags have most surprisingly done very well, but the more astonishing feature is the number of points Arsenal, Spurs and Chelsea have contrived to throw away. Let’s hope next weekend sees two of the three clinch Champions League spots.