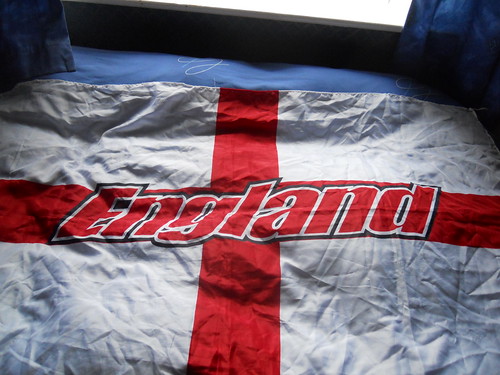 
The second is that there is no shame, in itself, in being beaten by better sides, as France and England were, indisputably, by Spain and Italy. There was shame in the manner of France’s departure from the tournament but we will come to that later; even so, Laurent Blanc attained the quarter-final placing that he’d set as his bottom line before the first ball was kicked.

But back to England. Last night’s game showed yet again the limits of playing like Chelsea vs Barcelona and Bayern, Sunderland vs Manchester Cuty (the home game). Sitting back, surrendering possession, defending valiantly, occasionally getting a slice of luck to keep the ball out and even more occasionally breaking forward to raise hopes of a surprise at the other end.

Eventually, a team with players who can pass to one another, move forward with purpose and effect rather than permitting not-quite-good-enough individuals to dribble themselves into trouble or pass hastily to opponents is likely to prevail.

As it happens, Italy didn’t manage that in normal and extra time and relied in the end on the Two Ashleys’ penalty nightmare to win. But whereas they had always looked capable of scoring, England never did, even when rare chances presented themselves. We were poor, and would have been made to look a lot worse had Italy not also been a shadow of past national sides.

But we made it through the group stage with a weakened squad and Roy Hodgson deserves some credit for that; it was not a national disaster, more a reminder that without the injection of foreign talent, the Premier would be a good deal less attractive and respected.

The diminishing part of France that cares any more is, to a large degree, appalled by the way Blanc’s team performed in Poland and Ukraine. After a long unbeaten run, more was expected by many, perhaps unrealistically. The reports yesterday spoke of a non-appearance against Spain.

SOS Fantômes – what the French called Ghostbusters – is how the L’Equipe headline summed up what Spain had achieved, France ejected from the Euros in a game they never seemed capable of winning and in which they failed even to show much character. The giant photo showed Alvaro Arbeloa, strong and dominant, grasping the hand of his prostrate opponent Karim Benzema. Teammates at Real Madrid, vainqueur and vanquished in Donetsk. 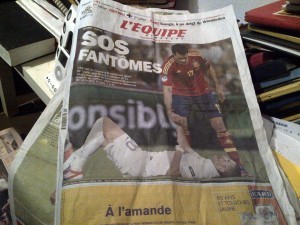 Spain, indeed, brushed aside les Bleus without needing to break sweat. But the French, like the English, expect more of the players who pull on the national shirt. And in the case of France, there were yet again signs that some of people simply cannot see the element of responsibility that goes with representing the country.

People whose opinions I normally respect rushed here in 2010 to justify the outrageous, mutinous conduct of the French World Cup squad, as if they were modern Gallic equivalents of downtrodden Durham miners struggling to stop the evil coalowners, played by the hopeless Raymond Domenech, reducing their subsistence levels of pay.

Blanc went to Euro 2012 with a markedly different ensemble, amid hopes that lessons had been learned. Fat chance. It was not a repeat of 2010. But Ben Arfa petulantly told Blanc to send him home, M’Vila shook the hands of neither the manager nor his replacement, Giroud, when substituted, players squabbled after the defeat by Sweden and Ménez collected what L’Equipe called one of the most stupid yellow cards of the tournament for his childish gesture to the referee all of 12 minutes after arriving on the pitch having already insulted his own captain, the French goalkeeper Lloris (one of the few to return with the right to hold heads high).

And then there was Samir Nasri. Even his father told him after his offensive gesture aimed at a L’Equipe football writer, as he left the field having scored to win a point for France against England, that this was no way to show his displeasure. The paternal influence failed to stop this rather silly individual choosing another media target on whom to vent his discontent after the Spain defeat.

Philippe Camps, writing today in Var-Martin, sounded miffed that Nasri’s ruffian-like ways had not at least been directed at opposing players. “He started Euro 2912 with his ‘shut your mouth’ and ended it with ‘you son of a whore’. His targets: not a 6ft (OK, two-metre) Swedish defender or a Spanish midfield counterpart ut one journalist from L’Equipe and another from Agence France-Presse. Class! The perfect example to give watching children who still dream.”

Salut! Sunderland has journalistic interests to declare but is never slow to criticise the excesses or inadequacies of the media, from back-page and website writers to TV and radio pundits. But is it not the height of blind idiocy to witness or learn about a footballer’s surly offensiveness and pass it off as all got up by the press? That is what a few did at goal.com.

Forgive me for not trawling through 400+ comments. This is the one that had me leaping into action:

I’m Arsenal, so I have no reason to say this but… I’m sick of the expectation that players should have no personality these days. So he swore big deal, he was not at a formal press junket. You can tell the story is a media beat up, which is probably going to be splashed everywhere. In the context of what’s been going on in the UK recently, unfortunately i’m starting to hate journalists.

[.. and when someone else pointed out the need for public figures to show self-control …]

You must control yourself 100% of the time, is that your conclusion? How reasonable. Yes he’s a role model, but we don’t own him. As far the money he gets, like all jobs, wage is dependent on the revenue you can generate for the orginisation, any student of economics will tell you that. No but, the problem really though is that journalists antagonise then lay in wait. God help you if you are an imperfect soul, not prepared, because like a mate said to me, if a journalist hears a house is on fire, they’ll be rushing to the scene with can of gasoline.

Prompting this from Monsieur Salut

Your defence of Nasri is admirable but please get your own facts right. The journalist worked for Agence France-Presse, a perfectly respectable international news service, and was in an area where accredited journalists are fully entitled to ask questions of the passing players. Nasri has every right to refuse to comment, even if that makes him look absurd, but no right – since he is there representing his country – to respond in an insulting, loutish way. The French squad acted disgracefully in South Africa and, with mostly different players, has behaved badly at times at Euro 2012. They cannot blame the press for everything even though, as your last comment shows, lots of people find that a tempting thing to do. I hope also that you are not suggesting that a rich man’s power to generate income for others is an unanswerable excuse for any misconduct he chooses. He is either a role model or he is not, and M Blanc appears to agree with me. Nasri is not the first player to bring minor disgrace on his country and won’t be the last but I can tell you that where I live in France, plenty of French people have lost interest in their national football team, not because they underperform (quarter finals was the bottom-line objective, and most supporters can live with going out at that stage to one of the two best teams in the competition), but because too many players cannot bring themselves to behave in a reasonable, civilised way.

Abes stood his ground, as he is entitled to do. As France and England leave the bigger boys to sort our Europe’s football pecking order – “France are out without anyone shedding a tear” (Var-Matin); England and penalties “always end in tears” (the Mail) – I leave further judgement to the Salut! Sunderland jury …