A new contributer, Josh Galley*, gives us his impressions of the opening salvos of Euro 2012 and the new manager’s approach to the task in hand. Reflecting on the build up and the first few fixtures, Josh has seen plenty of positives but isn’t yet ready to go overboard …

Well, as the first round of the Euro 2012 games has drawn to a close, it seems an opportune time to reflect on what we have seen thus far in the tournament, and reassess the level of expectancy that can be placed on Roy Hodgson’s revitalised England squad.

Going into the tournament, there has been an impending sense of doom regarding England’s hopes of finally realising success in a major international competition. We as a nation are certainly no strangers to controversy in football, and predictably, the build up to the Euros saw a multiplicity of incidents that gave the British media more than enough ammunition to derail our latest hunt for glory.

John Terry’s alleged racist verbal attack on Anton Ferdinand sparked media frenzy, and when senior FA officials reacted by stripping him of the England captaincy, Fabio Capello decided it was time to hit the road (a blessing in disguise). While this was going on, there was also the matter of Wayne Rooney’s three-match suspension (reduced to two on appeal) for his juvenile kick-out at Montenegro’s Miodrag Dzudovic, which called into question the England talisman’s place in the Euro squad. Hardly ideal preparation.

England’s troubles were not helped by the ever-expanding injury list, with Frankie Lampard, Gareth Barry, Gary Cahill and the promising Kyle Walker to name a few, all falling victim to untimely injuries. Surely that’s enough disruption to the preparations? No?

But then we had the furore when Roy decided that Rio Ferdinand would not only miss out on his initial squad, but would also be ignored when the Three Lions’ chief went in search of a replacement for the crocked Cahill. In my view, a bold decision and a statement of intent – in the media’s an astounding decision and a cataclysmic mistake. The same media that called for change and fresh-blood. There evidently is just no pleasing some people.

Going into their opening group game against France on Monday evening, the England players seemed focused, confident and relaxed. Likewise, the manager was a picture of calm, and rather than be drawn into discussing the threat of the French attacking line, he chose instead to focus on his own players and asked them to reproduce the form they’d shown at club level.

Alas, an England manager that seems able to recognize that this has been conspicuous by its absence in recent years. Hodgson also won over some of the doubters by selecting Arsenal’s whiz-kid Alex Oxlaide-Chamberlain (The Ox) in his first competitive England line-up, and as the team arrived at the Donbass Arena in Donetsk, there was an air of anticipation rather than resignation.

Do I sense a feeling of quiet optimism? Surely not.

I won’t bore you with a match report, I expect that anyone remotely interested in this article will have a good idea of what happened during the game and will likely have drawn their own conclusions. I believe that it was a solid England performance, and without ever really providing the fans with much to shout about, the players ground out a positive result against a side that for one reason and another, were expected to beat England. There were many positives to take away, including the link-up play between Ashley Young and “once our own” Danny Welbeck, the latter having a particularly good game with some intelligent off-the-ball play. We also saw the emergence of “The Ox” on the competitive international stage, and he clearly wasn’t fazed by the occasion with some flashes of individual brilliance.

With Wayne Rooney’s return edging ever closer, and what is surely the most difficult game out of the way, England have left themselves in a strong position within Group D. Although the joint-host nation Ukraine and the irritating Sweden will provide England with further tests, we should surely expect to obtain enough points to advance to the knockout stage, and then with a bit of luck it’s anybody’s game.

Ukraine boast a frontline of Premier League flops in Andriy Shevchenko (a class act) and Andriy Vornonin, whilst the Swede’s right flank is headed by none other than Seb Larsson who, despite my desire to defend, is definitely not cut out for such intense international football and will surely be a liability defensively.

In terms of the other teams in the competition, I’m far from overwhelmed by any of the football I have seen so far and see very little reason for England to fear any potential knockout opponents.

While many people’s favourites Spain, played some attractive football, they also looked vulnerable defensively, and if the latter stages of this seasons Champions League taught us anything it’s that dominating a game of football counts for nothing come the final whistle. The Germans look typically strong, and with the added ingredients of flair and class, they too look like contenders. The Netherlands, despite a convincing qualifying campaign, lost out to Denmark in their opening fixture, and with games against the aforementioned Germany and a dangerous Portugal to come, they have left themselves with a mountain to climb if they are to progress.

Elsewhere there were convincing wins for Russia and Croatia, albeit against uninspiring opponents in the form of Czech Republic and Ireland respectively. The Republic of Ireland’s performance was particularly disappointing and emergent Sunderland youngster James Mclean never made it onto the pitch despite laborious and predictable attacking play throughout.

Not to worry, I’m certain that Mclean will demolish Alvaro Arbeloa when Ireland clash with Spain on Thursday.

Looking forward I expect to see much more from the Spanish and the Germans, and despite my positivity surrounding Roy Hodgson’s England, ultimately I feel it will be one of the Euro 2008 finalists that comes away victorious. Positivity is the key though, and if the 2011/2012 football season is anything to go by, we could be in for even more surprises.

“Three Lions on a shirt” … COME ON ENGLAND 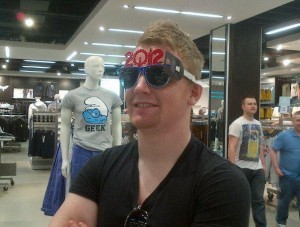 * Josh Galley on Josh Galley: I’m 22 and recently graduated from the University of Sunderland where I was studying English Language and Linguistics with a minor in Sports studies. Due to my Sunderland fanatic family, I’ve been a passionate Sunderland supporter since the age of about 6, and have had a season ticket for the best part of 9 years after finally moving back to the area in 2003. I spend much of my spare time away from the world of football reading and occasionally writing and I love the opportunity to have my say on what’s going on. I recently became a father to one of Sunderland’s latest recruits. If only he knew what he was (okay, I was) letting himself in for.

Next Post
Euro 2012: so far, not bad despite Mexican waves and the commentariat