The French media build-up to tomorrow’s game, England v France, has dwelt on England’s great capacity to disappoint in high competition, the injuries and disruptions to Roy Hodgson’s squad and the confidence derived from a long unbeaten run and some striking French form in the last few friendlies.

My Sunday paper even had a poll showing the French had moved some way towards forgiving the national side for the disgusting behaviour several of its members showed in the infamous mutiny during South Africa 2010. Raymond Domenech has gone, and the French say merci for that, to be replaced by the much more impressive Laurent Blanc. It must not be forgotten that however outrageously players conducted themselves, neither Domenech nor the dignitaries of the French Football Federation covered themselves in glory.

I suspect the newly emboldened France to present a stiff opening challenge. Like Patrick Vieira, interviewed in the same paper (Journal du Dimanche), I feel a draw or narrow French victory are the likeliest outcomes though I would be delighted to see Jordan Henderson come on and score a winner even his detractors could applaud.

One of the great voices of French football belongs to Thierry Roland. He is the longest serving of all football commentators here and combines great retention of detail, à la John Motson, a forceful personality – fill in your British equivalent for that – and a tendency to make the occasional outburst (Simon Crabtree?).

I experienced the booming voice at close quarters a few years ago when we had a meal together in his favourite bistro near the Eiffel Tower; they liked him, too, and had even named a dish after him.

He told me a terrific story about commentating on a Bulgaria-France World Cup qualifying match in Sofia 1976, a tale I see he repeated in Le Figaro‘s magazine at the weekend.

Ian Foote the Scottish referee, ”scandalously” favoured Bulgaria, according to our Thierry, disallowing a valid Michel Platini goal, allowing an offside Bulgarian goal on the immediate break and awarding the home side what the French termed an ”imagined” penalty in the dying seconds. They missed, France grabbed a 2-2 draw and topped the group.

But that penalty award prompted the following exclamation from Roland into his microphone: ”Monsieur Foote, you are a bastard.”

”But everyone [watching in France] thought the same as I did at that moment,” the commentator told Le Figaro before mentioning, as I remember him telling me back in 2005, that the pair of them were brought together some time later for a special Variety Club of France charity function when Foote explained that he had refereed that game ”sick to the stomach with fear”, with only a flimsy wooden rail separating the excitable crowd from the pitch.

”He was terrified at the idea of provoking the spectators. That one can understand. For me, a man who admits to fear of a mob, I respect him.” 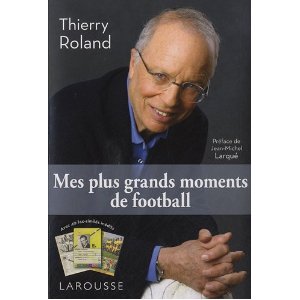 Now 74, Roland looks back on a golden age before players were cut off from the world and surrounded by lawyers and agents. ”Twenty-five years ago, if I needed a few words from Platini I picked up the phone. ‘I want to ask you three questions – can I come and see you tomorrow before the game?’ I’d ask. ‘No problem; we’ll have a bite together’.”

It all changed, he said, after the 1998 World Cup and Euro 200 victories for France. “For 40 years, I’d go to the game on the Saturday night and afterwards, when the team had dressed, we’d go and find a snack, everyone together including the opposition. I remember an international dropping me at the station in his car at 1.30am. Today, that would be inconceivable. You can barely speak to them.”

In 2012, Roland – who learnt English and English ways, cricket and caning included, when packed off across the Channel to a prep school after the Secpnd World War – expects France to do well.

He attaches special hope to the Benzema-Giroud-Ben Arfa combination. But he wishes the team would stop being ”the only one in the world that doesn’t bother to salute its supporters at the end of a match” and apologises for being enough of an old-fashioned sod to regret that the players don’t emulate les rugbymen of the French XV and sing along heartily to La Marseillaise before kickoff.

Next Post
Interest rate at all time low in Eurozone